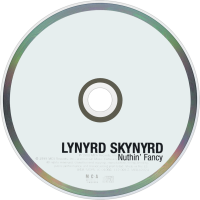 Nuthin' Fancy is a 1975 album by Lynyrd Skynyrd, their third studio album, and their first to reach the Top 10, peaking at #9 on the US albums chart. It was certified Gold on 6/27/1975 and Platinum on 7/21/1987 by the RIAA. This is the first record with new drummer Artimus Pyle and the last with guitarist Ed King until the reformation of Lynyrd Skynyrd and the release of Lynyrd Skynyrd 1991.