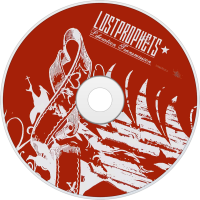 Liberation Transmission is the third studio album by Welsh alternative rock band Lostprophets. The album was released in June 2006 and became the first Lostprophets album to enter the UK album chart at number one (2 July for 1 week). The album peaked at number thirty three on the Billboard 200 album chart with 27,000 copies sold. The album has gone Gold in the UK and was the 94th best selling album of 2006, with sales over 210,000 units.
This is the first Lostprophets album recorded without original drummer Mike Chiplin. Josh Freese drummed at the request of Bob Rock, but the band's first choice was Travis Barker. Ilan Rubin, also played drums for the songs "Everybody's Screaming!!!" and "For All These Times Son, for All These Times".
The incorrect Latin on the front of the album cover, nobis pro lemma vobis, is widely believed to mean "for us, for them, for you"-a lyric from Lostprophets' single "Burn Burn". However, this is both grammatically and linguistically incorrect. Assuming the correct grammar, nobis pro lemmate vobis, the phrase would translate as "for us, for the title / theme, for you". A correct translation could possibly be pro nobis eis vobis.

User Album Review
Six songs into Liberation Transmission, Lostprophets' third full-length release, frontman Ian Watkins sings "The haircut's hot but this has gotta stop, good shoes won't save you this time'. Perhaps he should heed his own advice.Had they spent half as much time cultivating their songs as their floppy fringes, this album could have been quite special.
Instead, it's a missed opportunity. With 2006 quickly becoming the Year Of The Emo, this was the Pontypridd boys' chance to show popular US imports Fall Out Boy and Panic! At The Disco how it's done. Sadly, the bulk of Liberation... is content-light and production-heavy (when will Bob Rock learn?).
The 'Prophets do have a remarkable ability to conjure up a colossal chorus, but it's a trick they overplay here. And some of the album's more cheesy moments, such as the Casio keyboard 30 seconds into "Can't Stop, Got A Date With Hate", can't help but make you cringe.
That said, first single "Rooftops" - a natural sequel to Start Something's "Last Train Home" - is further proof that Lostprophets make radio-friendly summer rock anthems better than anyone else. Trouble is, they know it, and one great single does not an album make.