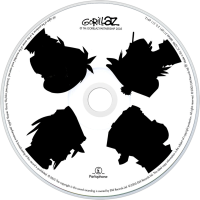 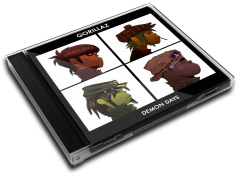 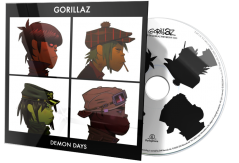 While Jamie Hewlett was working with his team on a script for a possible Gorillaz movie, Damon Albarn was still recording Think Tank with Blur. By the time Albarn was ready to start writing and recording material for the Gorillaz movie, the whole idea had already been scrapped, although a ideas from the movie's script were still used, including the themes of being driven-by-ego thing and the world being trapped in an endless night. Despite this, the album's main source of inspiration actually came about as a result of Albarn's train journey from Beijing to Mongolia where he, his partner and (at the time) six year old daughter spent a day travelling though what Albarn describes as a "weird, unspoken, forgotten part of China. It was basically dead trees as far as the eye can see," Albarn recalls. "Dust bowls, loose earth rapidly turning into desert. There are little satelite towns in the middle of these semi deserts that are absolutely on their knees. And it's the size of Europe this area. And then you wake up in the morning with this nightmare in your head and it's blue sky and beautiful sand, which looks fantastic now but was probably something else millions of years ago. And that will happen to us in our lifetime." Damon has said that, as a whole, the album is meant to be a depiction of a journey through the night in which each track represents a confrontation with a personal 'demon'.

The album also has many lyrical themes centred around the destruction humans are causing worldwide, speaking about the track "Fire Coming out of the Monkey's Head", Albarn explained, "That came from a very naive idea, which is: what is going to happen when they've taken all of the oil out of the earth? Aren't there going to be these vast holes? Surely those holes shouldn't be empty. Surely there is a reason why they had all of this in. It's like bad plastic surgery, eventually it collapses."

Hewlett was excited by the prospect of a second Gorillaz album, saying, "Let's repeat the same process, but do it better. Because everyone thought it [Gorillaz] was a gimmick. If you do it again, it's no longer a gimmick, and if it works then we've proved a point. And instantly, all of us got excited.

Demon Days was first mentioned in articles detailing the reopening of Gorillaz' website in early December 2004. Initially, a March or April 2005 release date was announced, but this date was later pushed back. In an article for Q magazine in February 2005 it was reported that the album was to be titled We Are Happy Landfill. Another early title was reported to be Reject False Icons, which is also the title of Gorillaz' culture jamming project. In January 2005 a promo for the song "Dirty Harry" was released as a white label 12", and an exclusive video was released online entitled "Rock It". It was later reported that the track would not appear on the album, although it later appeared on D-Sides, a collection of remixes, rare songs and B-sides released in November 2007. Demon Days' lead single "Feel Good Inc." became Gorillaz' biggest hit at the time, while the album's second single, "Dare" featuring Shaun Ryder, was a big hit as well and gave the band their first #1 single in the UK. Gorillaz collaborated with Roots Manuva & Martina Topley-Bird on the track "All Alone" and another song called "Snakes & Ladders", which was also recorded but does not appear on either Demon Days or D-Sides (however, an instrumental version of the song was used by Martina Topley-Bird for her song "Soldier Boy", which appears as a B-side on her single "Poison"). Another track that did not make the album or D-Sides is the song "Mr. Softy's Balloon Race", which features a drum machine and keyboard; although it didn't see a release, it was on the computer of one of the band members upon entry to the Gorillaz website. Since its release, Demon Days has been certified double platinum in the US and 5Ã— platinum in the UK. It was also certified Gold in Japan.

The album cover is a reference to Let It Be by The Beatles. It also resembles the artwork from Blur: The Best Of. The insert is composed entirely of artwork for each track as opposed to a lyric booklet. This makes it technically possible, by folding the insert the right way, to choose which piece of artwork, and therefore which track, appears on the front cover. This album has been released with the Copy Control protection system in some regions. A limited edition of the album was released including a copy of the album with a special four-way folding cover, allowing the owner to choose which fictional band member is on the cover. Packaged with it was an exclusive booklet containing partial lyrics, though the full lyrics are only available through the sheet music released for the album. The limited edition also includes DVD containing the video, audio commentary and an animatic for the music video "Feel Good Inc.", short animated films featuring the band, an exclusive audio track titled "The Swagga" and online access to exclusive sections of the band's website, with various wallpapers and screensavers, as well as a crowbar, facilitating the opening of a locked cupboard in the kitchen on Gorillaz.com in order to download the song "We Are Happy Landfill".

Album Review
Gorillaz return with a blisteringly good album that happily skips from genre to genre and looks set to be one of the most rewarding albums you'll hear this year.
WhenGorillaz's debut album came out in 2002, buoyed by the huge success of the "Clint Eastwood" single, no one really knew what Albarn and co. were up to. We knew the band was supposedly made up of ten year old musical genius Noodle, Satan worshipping green toothed bassist Murdoc, cuddly brick sh*thouse drummer Russel and the blue-haired singer 2D "for the ladies", but it essentiallysounded like an Albarn solo album produced by then-collaborator Dan The Automator. Singles aside, the debut album sounded somewhat unfinished, with most tracks being no more than vague sketches.
Demon Days is a different, more widescreen kettle of fish altogether. Hooking up this time with Dangermouse, who produced the online bootlegGrey Album which spliced Jay-Z's Black and The Beatles' White albums together to create merry copyright hell, Albarn has accumulated a stellar supporting cast of star guests to broaden Gorillaz's musical horizon.
Tracks such as the basstastic current hit single "Feel Good Inc" featuring De La Soul and the free download "Dirty Harry", which seems to blend the menace of a children's choir over a Tom Tom Club-ish funk stand out. Shaun Ryder guests on the mighty "Dare", and sounds more alive than he has for years. But the album's highlight has to be the rumbling dub of "All Alone" which unites Roots Manuva with Martina Topley-Bird.
Other unlikely collaborators crop up throughout, with Ike Turner on "Every Planet We Reach Is Dead", Neneh Cherry sexily supporting "Kids With Guns" and Dennis Hopper narrating a tale about the happy folk on "Fire Coming Out Of A Monkey's Head".
A concise and enjoyable 50 minutes, Demon Days is so much more than just a rock star's novelty side project or thinly veiled solo album. It's a triumph for all concerned and should rightfully end the year as being one of its finest and most celebrated releases. Tremendous.