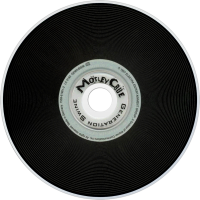 Generation Swine is the seventh studio album by the heavy metal band Mötley Crüe, released on June 24, 1997. It is widely considered their official comeback in the nineties and a renovation of their sound, taking influence of the trends of alternative rock, melodies of Cheap Trick and harmonies of Alice In Chains. The artistic freedom given by the record company for its production resulted in a degree of musical and lyrical experimentation unusual in their career.
The album marks the return of long-time lead singer Vince Neil since 1989's Dr. Feelgood, and the last to feature drummer Tommy Lee until his return for their 2008 album Saints of Los Angeles.