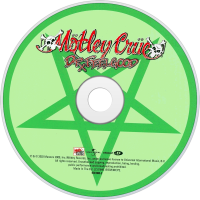 Mötley Crüe's albums were a lot like episodes of Married with Children -- they may not be great works of art, but they can be darn entertaining. With Bob Rock serving as producer, the L.A. headbangers savored the joys of trashy, unapologetically decadent fun on Dr. Feelgood -- an album that made no pretense at being anything else. While nothing here is quite as commanding as "Shout at the Devil," "Wild Side," or "Live Wire," such hook-oriented MTV smashes as "Kickstart My Heart," "Don't Go Away Mad (Just Go Away)," and the title song are infectious and hard to resist, and helped make this the best-selling Mötley Crüe album ever, as well as providing their first Top Ten singles. Unfortunately, the album would be lead singer Vince Neil's last album with the band for several years, thus marking the end of Mötley Crüe's heyday. Neil's departure -- and pop-metal's decline in popularity during the mid-'90s -- proved to be severe blows to Mötley Crüe, but Dr. Feelgood is still a fine curtain call.