Shout at the Devil

Track List
01) In the Beginning
02) Shout at the Devil 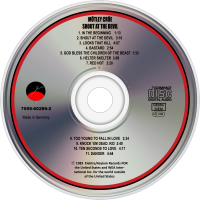 Shout at the Devil is the second album by American heavy metal band Mötley Crüe, released on September 26, 1983. The singles "Looks That Kill" and "Too Young to Fall in Love" were moderate hits for the band.

Shout at the Devil was Mötley Crüe's breakthrough success, bringing them to international attention. The album's title and the band's use of a pentagram brought the band a great deal of controversy upon its 1983 release, as Christian and conservative groups claimed the band was encouraging their listeners to worship Satan.