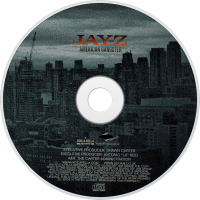 American Gangster is the tenth studio album by American rapper Jay-Z, released November 6, 2007 on Roc-A-Fella Records. It is Jay-Z's last studio release for the Def Jam and Roc-A-Fella Records label and his first concept album, which was inspired by the film of the same name. The album features production from Diddy & The Hitmen, Just Blaze, and The Neptunes, among others. Guest appearances include Beanie Sigel, Lil Wayne, Pharrell, and Nas. Jay-Z released an a cappella version of the album on the date of his 38th birthday, December 4, 2007.
The album was released to commercial success, despite being pulled from the iTunes Store at Jay-Z's request. It debuted at number one on the U.S. Billboard 200 chart, selling 425,861 copies in its first week, while tying Elvis Presley for the second most U.S. number-one albums. Upon its release, American Gangster received general acclaim from most music critics. Rolling Stone named it the third best album of 2007. The album has been certified platinum by the Recording Industry Association of America for shipments in excess of one million copies in the United States.

User Album Review
No mere album, this is a 'conceptual body of genius work' inspired by the upcoming movie 'American Gangster'. The concept is a 21st century blaxploitation soundtrack, and having THE Super Ego of hip hop mastermind an updating of that classic period, and embellish it with autobiographical detail, is a pretty damn mouth-watering prospect. And he has a point to prove; his last venture back from retirement Kingdom Come received a lukewarm response, at best.
So what do we get? Stax of horns, fat, slow grooves, falsetto backdrops, guitar wah, and a whole heap o' strings. Think Shaft slowed down to a strut with Jay Z’s trademark juddering flow laid over. For prime examples of how it all sits together check the laid back groove of "Party Life" or "Say Hello" wallowing in strings and female vocals. Underpinning it all is the narrative arc of the gangster ”“ dreams, hustle, success, and a sense of 'what does it all mean?'
It starts a bit predictably with the tensely strung, P Diddy-produced, "Pray" and "American Dream". They set the scene of the aspiring hustler but it doesn’t really get interesting until seriously sexy "Hello Brooklyn" in which he and super-smooth Lil' Wayne make love to a whole district of New York. It goes from strength to strength from there on in, with the odd exceptions "Ignorant S**t!" and "I Know". The latter's clever wordplay on a heroin theme is at odds with its irksome production.
The pared back, moody "No Hook" prepares the ground for another Diddy production, "Roc Boys", one of the strongest tracks on show. The pump and swagger of the horns provides the perfect playground for Jay’s flow: '”¦Pink RosÃ©, think OJ, I get away with murder, when I sing ye', heroin got less steps than Britney, that means it ain't stepped on, dig me'. The other towering number "Success", is slow, driven by heavy drums and organ loops, and so good Nas signed up on second fiddle. It's all rapped up with "Fallin'", and the curtain comes down with regrets: 'But Ni**as never learn till they end up in the news clip, the irony of selling drugs is sort of like you using it'.
Does it stand up? Definitely. His collaborators’ re-invention of funk-soul and Jay Z's charismatic rapping make ideal bed fellows. As if to prove how strong the concept is it muscles aside two of the toughest tracks, which are made to sit at the back of the class as 'extras'. The Pharrell-produced single "Blue Magic" is perhaps too of the moment, but its sparse beat jabs and synth stabs force a cameo. The theme tune "American Gangster" is really going back to his heights, hard and insistent like something off the Black Album but still with that seventies twist. It's bangin' and sees the album out on a high note. The release date? Fireworks night naturally. Boom!