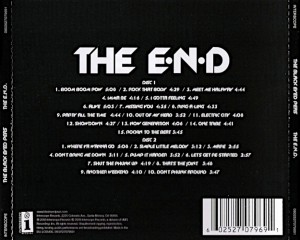 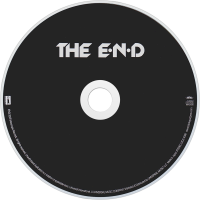 The E.N.D (stylized as The E·N·D, an abbreviation of The Energy Never Dies) is the fifth studio album by American hip hop group The Black Eyed Peas. It was released on June 3, 2009. Critics described the album as containing more anthemic and inspirational songs in the group's bid to appeal to a new generation of music listeners.
Three promotional singles, "Imma Be", "Alive" and "Meet Me Halfway", were released through the iTunes Store in the three weeks running up to the album's release. The album gave the group their first, second, and third US number one hits with "Boom Boom Pow", "I Gotta Feeling", and "Imma Be" which topped the Billboard Hot 100 for 12, 14, and 2 weeks respectively. "Boom Boom Pow" and "I Gotta Feeling" led the Hot 100 back to back, putting the band at number 1 on the chart for a record breaking 26 consecutive weeks (half a year). The third single, "Meet Me Halfway", along with the first two, topped several charts around the world including the United Kingdom and Australia. As of June 2011, the album has sold over 11 million copies worldwide, making it one of the biggest commercial successes for the music industry in recent years.

User Album Review
Since the last Black Eyed Peas album four years ago, Fergie's surprised us all by becoming one of the world's most popular solo stars. Despite penning most of her album, Will.i.am had no such success with his own record, even if he managed to woo the UK by taking Queen Cheryl of Cole under his arm on Heartbreaker.
Now the pair are back with fellow BEP comrades Taboo and apl.de.ap for their fifth studio album. While Monkey Business was a fun party album, The E.N.D steps it up a gear and through the power of the mighty vocoder transforms the Peas into in your fave dancefloor creatures.
The dramatic Boom Boom Pow lays out the album's intentions perfectly and with its “You're so two thousand and LATE” snap gives us a brand new insult to throw out there. I Gotta Feeling quakes with the familiar sound of it's producer David Guetta and fellow anthems Missing You and Rock That Body continue pummelling us with wild basslines and vocal snarling.
When it's time to take a breath of fresh air from the all-night rave, Meet Me Halfway is there to show you what BEP doing a Coldplay song would sound like. Answer: very good. Fergie regains some of the softness she explored on Big Girls Don't Cry on gorgeous love song Alive, but you’re advised to give her attempt at a Jamaican accent on the instantly skippable Electric City a miss.
Daring and constantly innovative, the Black Eyed Peas have taken the techno/RnB door opened by Kanye West and flung it open wide.