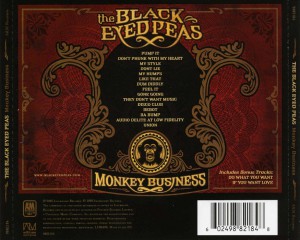 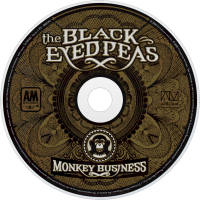 User Album Review
17 tracks on an album is practically unheard of these days, but with Monkey Business, The Black Eyed Peas have bucked the current trend: this is filled to the brim with catchy hooks, witty lyrics, and pumping hip-pop beats.
Widely misconceived as their 2nd album, in fact it is their 4th. It was only the addition of female vocalist Fergie on their 2003 release Elephunk and the starring role of super hot property Justin Timberlake on "Where is the Love" that propelled them into the multiplatinum, grammy award winning ensemble that they are today.
Monkey Business takes the fun and vibrancy of Elephunk and produces a record made for the dancefloor.Opening with the familiar brass and strings of "Dick Dales Miserloue" (aka the Pulp Fiction theme tune) on first track "Pump It", the trend is set with increasingly agitated vocals overlaying the beats telling us to Pump it, LOUDER.
Mr.Timberlake appears once more on the smooth "My Style" and heralds the first of many collaborations, with Dante Santiago, soul god James Brown, and even Sting appearing later on the album.
The most immediate track is the incredibly silly "My Humps". Sounding like a cross between Paula Abdul's "Opposites Attract" and Nenah Cherry's "Buffalo Stance", it wouldn't sound out of place on a Gwen Stefani album. Fergie and Will.I.Am sing playfully at each other, easily creating a vision of a boy/girl break-danceoff.
With its witty rhymes and clean lyrics, this is hip hop for families.The 'Peas sing about love and ladies rather than the gangsta lifestyle of drugs and guns, so commonly found in hip hop records. However it is this flimsiness of lyrics that may let the album down for traditional Black Eyed Peas fans who've been following the group since the days of 1998's "Behind the Front". Where once they sang about socially important issues, Monkey Business is more concerned with Fergie's lovely lady lumps. Those looking for meaningful lyrics would be better turning their ear to the music of OutKast. Yet if you want a record to fill the dancefloor, do as they say "Turn it Up", and blast your stereo louder.