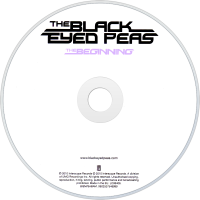 User Album Review
The dramatic, internet-fuelled crash in record sales has done weird things to pop. In decades passed, a gigantic global hit like previous Black Eyed Peas album The E.N.D. would infuse the mastermind behind it with a megalomaniac confidence, leading him to make the next album into a self-indulgent art statement that would either be masterpiece or brazen folly. But times have changed, and the main thing that The Beginning reminds us is that William Adams, aka will.i.am, led a self-consciously right-on, Fugees-lite, version of The Black Eyed Peas for eight years before hiring a singing blonde and grabbing a hit with the bland platitudes of Where is the Love?.
Therefore, and presumably with fear of past failure never far away, Will and company have followed monstrous success with an album that sounds like 2009’s Boom Boom Pow and I Gotta Feeling megahits got fed into a new software program that breaks songs into robot parts and reassembles them into infinite copies made slightly different by tiny details – a Chic sample here, a KC And The Sunshine Band melody there, a tweak of the ubiquitous auto-tuner everywhere. The Beginning is a depressing listen, not because the music’s that bad, but because it implies that even the most successful pop producer on the planet can’t afford to indulge in anything that might be construed as intelligent or interesting, lest the masses run away screaming in terror. It betrays a contempt for its audience, and disquietingly low levels of self-belief on the part of corporate American pop.
You want details? Okay. Twelve songs called things like Don’t Stop the Party, Just Can’t Get Enough and… Lord help us… Love You Long Time. Beats shamelessly purloined from five-year-old electro-house tunes. An entire lyric sheet consisting of lines about being in clubs cribbed from older, cooler records. Fergie increasingly reduced to an Auto-Tuned vocal effect. The bit from Dirty Dancing in pre-ordained chart hit The Time (Dirty Bit) which sounds like cheeky pop hooliganism until you listen to the album and realise that BEP are not being ironic. Dirty Dancing fits the audience demographic, pure and simple. And one suspects that if someone at the label told them that Black Lace and The Birdie Song were the nostalgic faves of American Idol fans, Will would be hooking those babies up to something The Chemical Brothers left in a skip before you could say, "But wasn’t Boom Boom Pow actually quite brilliant?"
Beware pop geniuses – hanging out with Cheryl and Simon can seriously damage your talent.