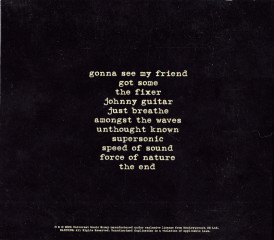 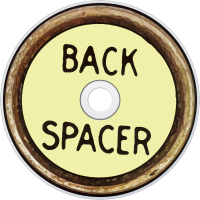 Backspacer is the ninth studio album by the American alternative rock band Pearl Jam, released on September 20, 2009. The bandmembers started writing instrumental and demo tracks in 2007, and got together in 2008 to work on an album. It was recorded from February through April 2009 with producer Brendan O'Brien, who was working with the band for the fourth time this was their first collaboration since 1998's Yield. Material was recorded in Henson Recording Studios in Los Angeles, California and O'Brien's own Southern Tracks Recording in Atlanta, Georgia. The music on the album the shortest of the band's career features a sound influenced by pop and New Wave. The lyrics have a more optimistic look than the ones in the politic-infused predecessors Riot Act and Pearl Jam, something frontman Eddie Vedder attributed to the election of Barack Obama.
The band released the album through their own label Monkeywrench Records with worldwide distribution by Universal Music Group via a licensing agreement with Island Records. Physical copies of the record were sold through Target in North America, and promotion included a deal with Verizon, a world tour, and moderately successful singles "The Fixer" and "Got Some"/"Just Breathe". Reviews for Backspacer were positive, praising the sound and composition, and the album became Pearl Jam's first chart topper at the United States' Billboard 200 since 1996's No Code, while also topping the charts in Canada, Australia and New Zealand.

User Album Review
Though you shouldn’t feel too sorry for a bunch of multimillionaires who’ve enjoyed a long career characterised by their doing more or less whatever they want, it should still be noted, by-the-by, that Pearl Jam are an absurdly misunderstood band. It’s true that mega-selling debut Ten was pomp-rock anthems agogo, but the fact that they were still pegged as classicist bores over a decade later flies directly in the face of such aggressively challenging outings as Vs, Vitalogy and Riot Act.
There’s no one obvious explanation for why Pearl Jam have finally achieved a measure of hipness as they arrive at ninth album Backspacer. Distance from the baggage of grunge, a dearth of quality peers, Eddie Vedder’s well-received Into the Wild soundtrack, a generation of rock critics that grew up with their 90s releases: these may or may not be factors. Whatever the case, the irony is that Pearl Jam find themselves in vogue just as they release their most musically conservative record since Ten.
Fortunately it’s also their most fun one. A usually confrontational, angst-ridden band, you’d be seriously pushing it to say Pearl Jam have ever really written an honest-to-God pop song before. Backspacer comfortably contains at least four killer examples, with the one-two-three of Got Some, The Fixer and Johnny Guitar easily the most nakedly exhilarating passage on any of their records. Fast, lean, melodic and hooky, they tread a nice line between new wave tautness (Joe Jackson and Buzzcocks would be solid reference points), the more flippant moments of their old idols The Who, and points that come surprisingly close to reprising the old fashioned teen pop they mined ten years ago with cover Last Kiss.
Backspacer is neither the perfect pop record, nor the perfect Pearl Jam album; its biggest problem is that, shorn of the intensity of yore, the slow songs tend not to hit home that hard. But for the most part pedal is put firmly and thrillingly to metal, and it’s truly great to hear these troubled souls finally having such a blast.