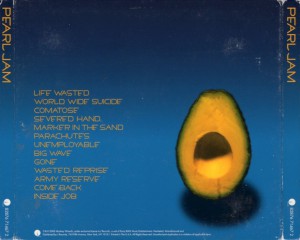 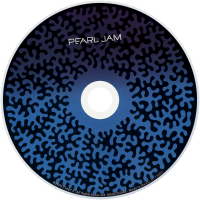 Pearl Jam (sometimes referred to as The Avocado Album) is the eponymous eighth studio album by the American alternative rock band Pearl Jam released on May 2, 2006 on J Records. It was the band's debut and only release for J Records and also their last album issued by Sony Music. It was the band's first full-length studio release in almost four years, since Riot Act (2002). Following their performances at the Vote For Change tour in 2004, the band commenced work on Pearl Jam in November 2004 at Studio X in Seattle, Washington and finished in February 2006.
The music on the record was proclaimed as a return to the band's roots, with an emphasis on up-tempo songs with an aggressive sound. The song lyrics are mostly told from the point of view of characters and deal with the socio-political issues in the United States at the period, such as the War on Terror.
Pearl Jam was critically well received and was a commercial success, debuting at number two on the Billboard 200 chart and eventually outselling the band's previous release, Riot Act. The album also produced three singles-"World Wide Suicide", "Life Wasted" and "Gone"-which were moderately successful. The band supported the album with a full-scale world tour in 2006.
Pearl Jam was recorded at Studio X in Seattle, Washington. The band began work on the album following the 2004 Vote for Change tour in November 2004, and again employed producer Adam Kasper, who worked with them in predecessor Riot Act. The recording sessions started in February 2005, and worked on it off and on throughout the year, with the sessions being interrupted toward the end of the year when the band toured North America and South America. The album was completed in early 2006. Bassist Jeff Ament attributed the length of time recording to lead vocalist Eddie Vedder having a child and the band touring in the middle of recording. The album was mixed by Kasper at Studio X.
For the first time since 1993's Vs., the band members did not go into the recording sessions with any completed songs, only guitar riffs. Vedder admitted that the band "really went in with nothing." The band sat around playing music together and discussed the song arrangements, and in just one week had completed ten songs. Ament described it as a "real collaborative effort," and Vedder described it as "absolute democracy." Guitarist Mike McCready stated that the band members were feeling "fresh and energetic" and "were communicating better than ever." Toward the end of the sessions it came down to Vedder to finish up the material, with Ament observing that "the way the record started and the way that it finished is probably two different things." Regarding his lyric writing process, Vedder said that he wrote at least four different sets of lyrics for each song, with many going as high as eight. Vedder described as a process that demands "the patience of like a National Geographic photographer sitting underneath the bush in a tent", adding he would at times "figure out after eight, nine or eleven drafts that the first one was actually the one". A total of 25 songs were written before coming down to the 13 on the final track listing. Outtakes include "The Forest", later featured on Ament's 2008 solo album Tone, and "Of the Earth", which started being played live in 2010.

User Album Review
While the fact that Pearl Jam are still together fourteen years after the release of their seminal debut album Ten is remarkable enough, this, their eighth studio album, provides ample evidence that they still have a marked determination to continue preaching their message.
The record opens in angry style with Vedder snarling over furious guitars that don't relent until the end of the fifth track. You'd be forgiven for thinking you'd stumbled across the latest batch of angst-fuelled, punk-loving teenagers rather than the Seattle grunge veterans. They rage against George Bush, the Iraq war and American apathy while guitarists Stone Gossard and Mike McCready serve up aggressive rock solo after solo.
However the ballads that dominated previous albums are evident here too, though they sound unnervingly similar to Bruce Springsteen's acoustic work.
Their most accomplished album in years closes in epic style with the seven minute long "Inside Job" - proving the band care little about writing three minute pop songs these days.
Long may their crusade continue.