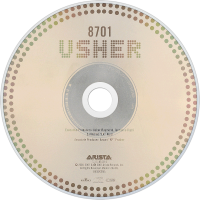 The album debuted at number-four on the US Billboard 200 chart selling 210,000 copies. It has sold 4.7 million copies in the US and over 8 million worldwide; it received a 4Ã— platinum certification from the Recording Industry Association of America (RIAA). 8701 received mostly positive reviews, with critics praising Usher's more mature and polished vocals. Billboard ranked the album number 63 on the Billboard 200 decade-end charts.