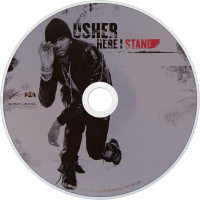 Here I Stand is the fifth studio album by American R&B recording artist Usher, released on May 13, 2008 by LaFace Records. Inspired by love for his new wife-Tameka Foster-and son, Usher recorded many ballads for the album. Prior to the album's recording, Usher split with his mother, Jonnetta Patton, as manager and hired Benny Medina. Usher's estranged father died months before the release of Here I Stand; this also influenced themes of the album. It was originally to be titled "Measure of a Man", but Usher named it Here I Stand to mark "a new chapter in [his] life".

Usher promoted Here I Stand by performing on several television shows including Total Request Live, 106 & Park and Good Morning America. Among other concert appearances, he embarked on a One Night Stand: Ladies Only Tour, performing fifteen shows in November 2008. Five singles were released from Here I Stand: "Love in This Club", "Love in This Club Part II", "Moving Mountains", "What's Your Name" and "Trading Places". "Love in This Club", which features rapper Young Jeezy, topped the Billboard Hot 100 and New Zealand Singles Chart.

Here I Stand received mixed to positive reviews from music critics. Some music critics praised Usher's growth and maturity, while others were unimpressed by the change in style from Confessions (2004). Here I Stand debuted atop the Billboard 200, and sold 433,000 copies in the US in its first week of release, and has since sold 1.5 million copies in that country. The album also reached number one on the Canadian Albums Chart, UK Albums Chart and Australian Albums Chart, and has sold five million units worldwide.

Although it had sold two million copies by August 2008, Here I Stand was seen as a commercial failure relative to Confessions, which had sold nineteen million copies. Tyler Lewis of PopMatters put the album's limited success down to Usher's and Foster's marriage; he believed that Usher's fans disliked Foster, whom he divorced in 2009.