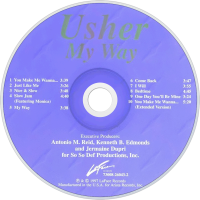 My Way is the second studio album by American R&B recording artist Usher, released by LaFace Records on September 16, 1997 in North America. It featured guest appearances by Monica, Jermaine Dupri, and Lil' Kim and spawned three singles: the platinum-selling singles "Nice & Slow", "My Way" and "You Make Me Wanna...".