On Through the Night 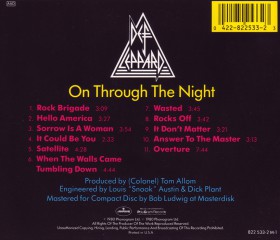 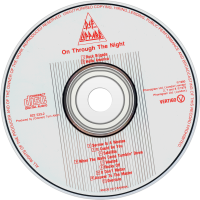 On Through the Night is the debut album by British heavy metal band Def Leppard, released in 1980. The album charted at #51 on The Billboard 200 and #15 on the UK Albums Chart.It features rerecorded versions of "Rocks Off" and "Overture", tracks from the band's original independently released EP, The Def Leppard E.P. Other tracks are rerecorded versions of early demos, some of which appeared on the First Strike and Warchild bootlegs. The album was certified platinum by the RIAA on May 9, 1989. The band have stated on many occasions that they do not like this album (which is rawer in sound and more in line with NWOBHM bands like Saxon) and consider High 'n' Dry their first proper album. Aside from a select few extremely rare performances of "Wasted" and "Rock Brigade" over the years, the album has been completely ignored in their live sets since the mid-1980s.

"Wasted," "Rock Brigade" (b/w "When The Walls Came Tumbling Down") and "Hello America" were released as singles. However, the version of "Wasted" that appears on the single is a different recording from that of the LP, as is its b-side, "Hello America".

This album was produced by Tom Allom, perhaps best known for his work with Judas Priest, and is one of the only Def Leppard albums that receive little or no radio airplay, as compared to the likes of their later albums like Pyromania or Hysteria.