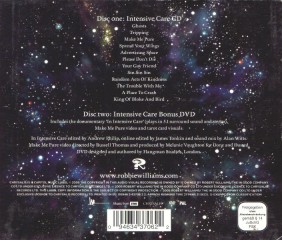 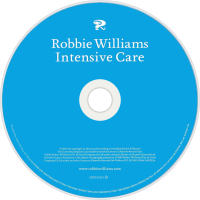 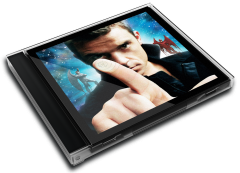 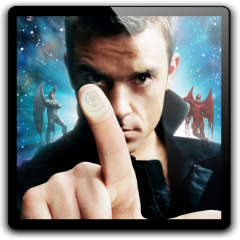 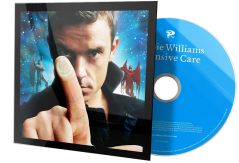 Intensive Care is sixth studio album by English singer-songwriter Robbie Williams, released on 24 October 2005 in the United Kingdom.
After touring Latin America in late 2004 for the promotion of his Greatest Hits album, Williams started working on what would become his sixth studio album. Recorded in his bedroom in the Hollywood Hills, the album was co-written by Stephen Duffy over the course of 24 months. The album was launched in Berlin, Germany on 9 October 2005. It was not shown on television, but broadcast to various locations around the world in cinemas and theatres, in a high-definition "cine-cast". It was shown on Saturday 22 October 2005 on Channel 4.
When Intensive Care was released in October 2005, it became a smash hit around the world, hitting number-one in the United Kingdom, selling 373,832 copies in its first week, as well as topping charts in twenty other counties including Argentina, Australia, Austria, Germany, Sweden, Switzerland, The Netherlands, New Zealand and many other countries. Following the success of the album, Williams won the MTV Europe Music Award for 'Best Male', and also entered The Guinness Book of World Records for selling 1.6 million tickets in a single day for his 2006 world tour. The album became the best selling album in Europe by the end of 2005, with sales of over four million copies. However, it only managed to become the third best selling album in the United Kingdom that year. Williams kicked off his Close Encounters World Tour in South Africa in April 2006 in promotion of the album. More than 2.5 million attended the early stages of the tour, with nearly three million having been reported to have seen one or more shows. In January 2007, it was revealed Intensive Care had sold over 5 million copies in Europe, and as such, was certified 5Ã— Platinum by the IFPI.[14] It was also certified 5Ã— Platinum in the United Kingdom around the same time.[15] In Mexico, the album was certified platinum shortly after its release, for shipping 150,000 copies of the physical album, and in December 2008 the album was certified 2Ã— diamond for pre-loaded digital sales of 1,000,000 copies. By shipping 1,100,000 copies and reaching 11Ã— gold, Intensive Care became the eighth best-selling album of the decade in Germany.[citation needed] It also became Williams' fifth album to reach a position in the top twenty of the best-selling album of the decade, with Swing When You're Winning, Escapology, Live at Knebworth and Greatest Hits also earning places. According to EMI, the album has sold 6.2 million copies worldwide.

User Album Review
Intensive Care opens with Robbie shouting, cocksure and desperate, "Here I stand victorious, the only man to make you come". The sixth album from Williams is overwhelming in its pureness of personality. It couldn't come from anyone else, dysfunctional, showy, telling stories about women he doesn't understand, relationships he can't function in, paranoia and isolation, all with a strangely positive and exciting spin.
Williams is putting more self reflection and understanding in his music than ever before, and he's a rich seam of material. As you would expect, he's not short of the hi-budget surrounding support of cellos, gospel choirs, and brass. But it would be unwise not to mention his writing partner in the unlikely and credible shape of Stephen Duffy: surely the reason behind the new honesty and eloquence, and more interesting and inventive songs that convincingly capture about 50 different genres. Gloriously imperfect, the personality makes the album, and it's his best yet: almost worth the 80 million.