Me Against the World 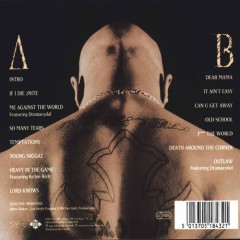 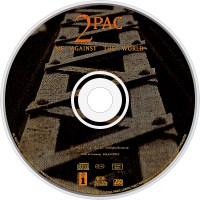 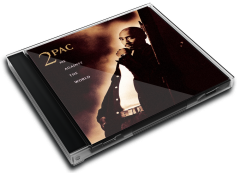 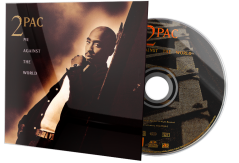 Me Against the World is the third studio album by American hip hop artist Tupac Shakur. It was released March 14, 1995 on the Interscope Records label. The album was composed of un-used tracks from the Thug Life era, and from other studio sessions from 1993 to 1994. It was his impending prison sentence, troubles with the police and Shakur being poor, which many believe might have contributed to Shakur's artistic re-emergence on record, as his material is believed by Steve Huey of Allmusic to have become markedly more "confessional", "reflective", and "soul-baring".
Me Against the World, released while Shakur was imprisoned, made an immediate impact on the charts, debuting at number one on the Billboard 200. This ultimately made Shakur the first artist to have an album debut at number one on Billboard 200 while serving time in prison. The album served as one of Shakur's most positively reviewed albums, with many calling it the magnum opus of his career, and is considered one of the greatest and most influential hip hop albums of all-time. It is also his fourth biggest selling album with 2,439,000 units moved to date. Me Against the World won best rap album at the 1996 Soul Train Music Awards.

Album Review
Among movie roles, music-video cameos and court appearances, Tupac Shakur remains a frustrating yet fascinating character because it’s obvious that the 23-year-old rapper has decided to make his journey for self-discovery open to the world. His personality seems split right down the middle — one half collected and reflective, the other coiled and venomous, waiting (like the “shining serpent” contained within the meaning of his African name) to strike out at anything in his path.

The same man who is capable of poignant paeans to black women like “Brenda’s Got a Baby” and “Keep Ya Head Up” is the next minute fuckin’ and chuckin’ “hos” in “I Get Around” of lickin’ off shots at everyone from the cops to that jealous brutha down the block. Imagine his debonair face screaming “Thug Life,” gat in hand, spliff in pocket, lashing out at a society that he blames for his rage and the impoverished condition of his people, often without looking at his own contribution to that misery. Hoochie-coochie man, nationalist revolutionary, smoky-eyed thug — he has juggled all three roles, and as a result, his two previous albums, 2Pacalypse Now and Strictly 4 My N.I.G.G.A.Z., were plagued by convoluted thematics that proved distracting if you wanted to think about the ideas beyond the beats.

Most of the songs on Me Against the World, 2Pac’s third and best album, demonstrate that underneath his hardened postures is a method. Sure, the thug still hangs around, remorseless and defiant, but for the first time since “The Streetz R Deathrow” and “Papa’z Song,” 2Pac lets the listener look at the roots of his anger. With less thuggin’ clouding the picture, 2Pac examines some of the results of the gangsta lifestyle: paranoia, the promise of death and a combative relationship, with a higher, all-powerful authority.

Stylistically, “If I Die 2 Nite” is Shakur’s most acrobatic turn at the mike since the Warren G-produced “Definition of a Thug Nigga.” Producer extraordinaire Easy Mo Bee (Notorious B.I.G., Craig Mack) lays the beat low and thick while 2Pac drops his alliterative maxims: “They say pussy and paper is poetry, power and pistols/Plottin’ on murderin’ muthafuckas ‘fore they get you/Picturing pitiful punk niggas coppin’ pleas/Puffin’ weed as I position myself to clock Gs…. Been seeking psychotics/Society/Somebody save me/Addicted to drama so even Mama couldn’t raise me.” Like his cohort B.I.G., 2Pac asks if there is a special part of heaven reserved for castaway thugs who commit despicable deeds sometimes with the best of intentions.

The album is at its sharpest when 2Pac avoids formulaic, radio-friendly material (“Me Against the World,” “Temptations”) and raps from the heart over slowed-down tracks. The powerful “So Many Tears” finds an almost vulnerable 2Pac not only dealing with the senseless violence that marked his childhood but with the internal demons that threaten to consume him, snapping at his conscience like hellhounds on a bluesman’s trail. “Lord Knows” is similar, depicting him running to the bottle and the spliff to medicate himself: “Even though I know I’m wrong, man/Hennessy make a nigga think he strong, man…. I smoke a blunt to take the pain out, and if I wasn’t high, I’d probably try to blow my brains out.” “Dear Mama” is a heartfelt, sometimes harsh dedication of love for his mother that deals with the trials and tribulations each has put the other through.

Me Against the World — by and large a work of pain, anger and burning desperation — is the first time 2Pac has taken the conflicting forces tugging at his psyche head-on. Whether he leaves prison with a new sense of direction or is consumed by the same forces that chased him as a ghetto child running wild remains to be seen. But love him or hate him, 2Pac remains one of the most compelling characters in black popular culture — and a stint in jail is unlikely to change that.