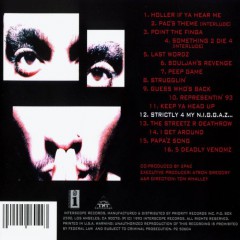 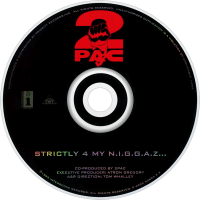 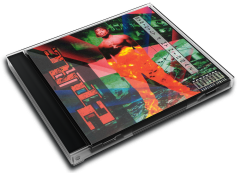 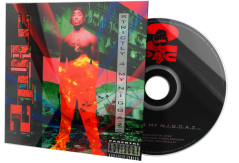 Strictly 4 My N.I.G.G.A.Z. is the second studio album by West Coast rapper 2Pac, released by Interscope Records on February 16, 1993. The rights now belong to Amaru Entertainment.

Similar to his debut, 2Pacalypse Now, the album contains many tracks emphasizing 2Pac's political and social views. The album was going to be named "Troublesome 21", the 21 referring to Shakur's age at the time. Debuting at number twenty-four on the Billboard 200, this album saw more commercial success than its predecessor, and there are many noticeable differences in production. While Tupac's first effort included a more underground or indie-rap-oriented sound, this album was considered his "breakout" album. It spawned the hits "Keep Ya Head Up" and "I Get Around" and reached platinum status.

Album Review
Often considered the weakest of 2pac's early career, Strictly 4 My N.I.G.G.A.Z is a 1993 release, with 2 major hits and higher album sales than his debut, 2pacalypse Now, but often criticized for the production and some of the lyrical content. In my opinion, this is a rather unfounded opinion. The production is a changed feature, but this is not a bad thing. The lyrics on this album are primarily the same political and social commentary found on his debut, only with a few variations into general Thug Life and the occasional moral message that would find its way into Pac's later material.

This album is definitely full of great moments. The bass solo that closes off Holler If Ya Hear Me is a well written piece of music, that shows that rap albums are not all about the actual rapper, but also the beats that back it up. Great beats are also found in the songs Souljah's Revenge, Peep Game and Last Wordz, which also featured guest stars Ice Cube and Ice-T, two other extremely successful rappers of 2Pacs generation. These are factors that definitely add to this album's integrity, and even top some of his better work's beats.

The production on this album is often maligned, as either feeling flat or too underwhelming. This album, however, is intended to sound more organic, and appeal to both the commercial and the underground hip hop fans. As such, 2pac himself is mixed a little further back than on his past album or his later albums, so the music was also more audible, with everything being on the same level mixing. This, in my opinion, really works when coupled alongside the thug and political lyrics on display here, and is a really tight production job when stacked against the album that preceded it.

The lyrics are, of course, the meat of every hip hop album, and on here they are absolutely top notch. This was a journey into the mind of a street man, speaking his opinions at everything from the Government (Point The Finga), to the oppressed (Keep Ya Head Up). In the case of the latter, this was a rarity in earlier 2pac, in which the lyrical content was mainly the thug inside 2pac being allowed to speak more, so it is a nice variation. Much rap gets maligned too often for talking of nothing but guns and girls, and 2pac truly was unique for his day in that he was not afraid to speak on every subject, without ever holding anything back. 2pac has always been the artist to speak out on whatever he thought, and this is a great example of that.

The flow of 2pac on this album is virtually untouchable, given that he was extremely rusty on his debut, this was a large step up. Album opener Holler If Ya Hear Me was the perfect introduction into 2pac's rapping style, and also one of the tightest flows he ever came up with on his earlier releases. Throughout the duration of this album, he goes through a number of different speeds and styles, and pulls them all off well, with this being one of his better performances, flow-wise.

Keep Ya Head Up was one of 2pac's hits, and it really is not hard to see why, with some cracking lyrics and an incredible flow, with a tight beat to top it all off. Last Wordz is extremely curse happy, but is also one of the best on the album, with some ingenious lines, and the perfect usage of the two pre-mentioned guest stars. Holler If Ya Hear Me has a fairly quick flow to it by 2pac's standards, and really works, coupled with the intense lyrical content, making this one of the standouts.

Unfortunately, this album is not all incredible. Point The Finga in particularly sticks out like a sore thumb, with the lyrics not being up to scratch throughout, despite having some nice lines. Another criticism to make would the fact that it almost relies on profanity at times to carry it through, with curses and slurs throughout, alongside a fair amount of cliched use of talking about guns and throwing offense at the police.

On the whole, this album really did not feel like too much of an evolution to his debut. Flow-wise and in terms of variation it is light years ahead of 2pacalypse Now, but in terms of production and the actual meat of the lyrics, this really is a step down from 2pacalypse Now, which was an absolute masterpiece, despite being a little underwhelming. All early 2pac releases are plagued with the same problem that the listener goes in having heard either the big singles or just having generally high expectations of the album, and it falls well short of their expectations, with the cracks showing too much. And this really is shown on here. In particular, there are the lines on here that are similar to the first album are lines such as "tell me whose the biggest gang of niggaz in the city" found on Soulja's Revenge, which was also found on the debut album in the song I Just Dont Give A ***. This, in my opinion, was just lazy on the behalf of 2pac Shakur.

In general, 2Pac is both a loved and hated artist. This was a man who was not afraid to admit that he was a thug, but was determined that nobody else should make the same mistakes as he did, with many moral messages included in songs such as his later hit Changes. The man had extremely high sales and critical reviews. However, there was also the thug side of him that is universally despised, including the rape allegation that nearly ruined his career. Love him or hate him, however, Pac was a lyrical genius, and this album is a good album to display this, although not as good as later releases. For a hip hop listener, this is definitely worth a go, but for the rest of the music community, give this a miss, as his later material is far more accessible, when he stopped talking so much about the ghetto and more about more varied subject matter. However, the definitive early 2pac release would be the first one, 2pacalypse Now, which is a fantastic release, and slightly better than this. 3/5