Loyal to the Game 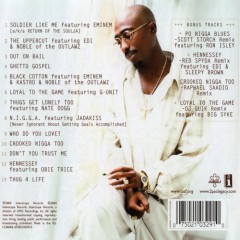 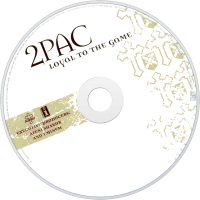 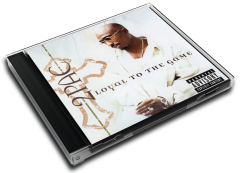 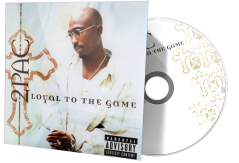 Loyal to the Game is the sixth posthumous studio album by Tupac Shakur. It contains remixes of previously unreleased music recorded by Shakur before his death in 1996. Released in the United States on December 14, 2004 (December 12 in the United Kingdom), Loyal to the Game was produced by Eminem.
According to an interview with MTV, Eminem was so moved by Tupac's life and work that he wrote a letter to Tupac's mother, Afeni Shakur, asking her to consider letting him produce the album. Shakur agreed, giving Eminem the go ahead. The album featured two singles- "Thugs Get Lonely Too" and "Ghetto Gospel".
Eminem used various unusual production techniques during the creation of this album, namely modifying the pace and pitch of Tupac's voice to better suit the beats produced. There was also various uses of the cutting and pasting of vocals to produce new words synonymous with current rap culture, such as saying "G-Unit"", "Obie Trice" and "Em" instead of "LG", the original producer of "Out On Bail".
The original title track was recorded in 1993 by 2Pac, Treach and Riddler for the Above The Rim and was produced by Reginald Heard. DJ Quik made a remix, the tempo of which is the same as the original, that was added as a bonus track; DJ Quik also suggested to Tupac's mother, Afeni Shakur, that the title track be known as "Loyal to the Game".

Album Review
Tupac Shakur is the best rapper to have ever picked up a mic. There is really no one else who can even come close to him. In terms of flow and rhyming originality, Tupac (or 2pac) is definitely on top of the pile.

2pac was shot to death in 1996. This album was released in 2004. That's a long time after his death, and this was the tenth postmortem album that was released under his name. You can only dig so far back in someone's recordings, even if it is the legendary 2pac. What you get on this album is the dregs. These rhymes are unoriginal and poor. All of the songs on here are either about sex or the "Thug Life." His flow seems to have been accelerated a bit on this album, it is not the same flow that 2pac had when he was alive. Also, it is very awkward to hear the age difference in 2pac. These rhymes were recorded during different periods of his life, and you can tell when the "young" 2pac is rapping versus the "older" 2pac. For example, 2pac sounds very young in "Ghetto Gospel," but then sounds much older on "Thug 4 Life."

While 2pac sounds awkward lyrically, it is even worse in terms of beat. Eminem was the producer for this album, and his production style does not fit 2pac one bit. Eminem has always been known for having a bouncy, cartoonish style when he raps. As we saw on The Eminem Show, Em's beats are nothing special. They were rather poppy and bouncy. 2pac has always been a rather serious rapper. When Eminem's cartoonish beats and 2pac's dark rhymes mix, the results are not pretty. For proof, look no further than "Who Do You Love"" Now, we all know 2pac's flow has never been overly fast. It is rather slow, but undeniably powerful. Eminem's beat in this song is rather fast moving, which results in a speeding up of 2pac's flow. The lyrics are very serious, talking about the "Thug Life," but Eminem's flow is bouncy, and does not carry the same air of seriousness that Pac's rhymes demand. The result is a train wreck. The song is a terrible combination of two things that should never have been mixed.

When you get this far back in someone's library of tapes, you are going to come up with more than a few holes. Eminem attempted to plug these holes with numerous guest appearances. Only six of the eighteen songs on this album are solo 2pac, the other twelve have guest appearances. These guests are one of the few redeeming factors of this album. Some of the numerous guest appearances are by the respected rappers Eminem, 50 Cent, and Jadakiss. But for every well known rapper on here, there are just as many ones that came out of the depths of obscurity just for this album, such as E.D.I., Ron Isley, Kastro, and Young Noble. While the well known rappers deliver some very good rhymes, these lesser known rappers do not do the same. Their rhymes are just as bland and unoriginal as 2pac�s. Kastro's rhymes are nearly incomprehensible, with lines such as "Old heads say live your life like such, your sure to catch her witcha one day boy," from the song Black Cotton. These obscure rappers seem to make slight deviations on 2pac's themes from his verse, and just regurgitate what he has already said. But Eminem, 50 Cent, and Jadakiss all perform rather admirably. One of the highlights on this album is Jadakiss's verse in N.I.G.G.A. Eminem of course raps circles around 2pac here, as is shown in the album opener Soldier Like Me.

It just gets worse. The actual songs on here are nearly unmemorable. They all blend together in a sea of mediocrity. After listening to the album, it is tough to remember one 2pac rhyme or one distinctive beat. The songs all follow the same formula of one or two Pac verses about the "Thug Life," a mediocre hook separating the verses, then one verse by a guest. Sometimes they add one more guest verse or one more Pac verse, but they are all about the same subject. There are only two songs that really stand out on this album, and they are Loyal To The Game and Crooked N*gga Too. Crooked N*gga Too doesn't stand out from the crowd in terms of lyrical originality, you can probably tell that from the title. What's different about this song is the speed of Pac's rhymes. He raps the fastest he has on this album on this song. He actually does rather well with this fast rapping style. His individual rhymes are the usual, but for the first and only time on the album, the beat is good. It's fast paced and foreboding, just like 2pac's lyrics.

Loyal To The Game is the highlight of the album in my opinion. While 2pac's rhymes are no better than usual, 50 Cent and Lloyd Bank carry this song. The chorus is nice and catchy, rapped by 50 Cent. 50's and Lloyd's verses are both very good, improving on the raw out line that 2pac's rhymes created. Despite the good guest appearances, the beat is nothing spectacular. It's slow and plodding, which is at least different than the jumpy beats on the rest of the album.

This album is closed out by four remix tracks. More than anything else, this is what raises the album from a 1 to a 1.5. These beats are crazy good, and they mesh perfectly with Pac's lyrics, unlike Eminem's. Scott Storch probably creates the best remix, of the song Po N*gga Blues. This is actually the only version of the song on the album, so it may not technically be a "remix." The tracklisting on the back of the CD does list it as a remix though. You may recognize Scott Storch, as he is one of the most respected producers in hip-hop. He is the one who produced Chamillionaire's hit song, Turn It Up. While he doesn't quite deliver that good of a performance on this song, it is still at least adequate. Probably the best beat on the album. The Hennessey remix is good, but the Loyal To The Game and Crooked N*gga Too remixes are both much slower than the originals. While this may have been an attempt to cater to Pac's flow, it doesn't work well in those two tracks. The originals are better in both cases.

Overall, this is a really poor showing by the rap king, 2pac. This album was never meant to be released, it is a dark stain on Pac's reputation. The guest appearances and guest producers carry this album, not 2pac himself. His lyrical ideas are tired, and his flows are out of whack. There are almost no redeeming qualities on this album. I would recommend leaving this on the shelf. If you must, there are two or three songs that are okay.