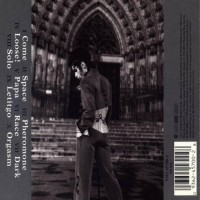 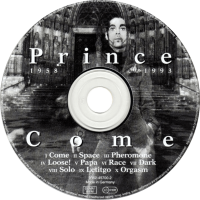 Come is the fifteenth studio album by Prince, released during his public dispute with his then-record company, Warner Bros.

Album Review
Come is the album in which Prince ‘killed’ off his persona (the cover picturing him standing outside a church – which is actually the La Sagrada Familia in Barcelona) to highlight his embittered dispute with Warner Brothers over the ownership of his past music and to symbolise the closure by Warner Brothers of his label Paisley Park Records.

Come (certified Gold by the RIAA) would in the wreckage of Prince’s dispute with Warner Brothers become his last album under their label both as ‘Prince’ and containing newly recorded material. Henceforth, until 16 May 2000, Prince would be known as The Artist Formally Known As Prince (or The Artist Formally Known As Prince). Come went through many configuration changes and Prince hoped its release to coincide with that of The Gold Experience – an album he recorded simultaneously with Come – however that wish was denied and the latter album was postponed and a further nail in the coffin of Prince’s relationship with Warner Brothers.