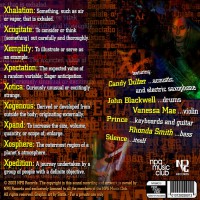 Xpectation is the twenty-sixth studio album by Prince, only available for download on his website, NPG Music Club. The album was made available for MP3 download on January 1, 2003 and all the songs are instrumentals. The album was originally intended to be called Xenophobia, and NPG Music Club had previously advertised the album as one of the "4 CDs" club members would receive in the mail during 2002 for their paid $100 subscription fee.
However, after mailing the first of the promised discs in March/April 2002 (the One Nite Alone... piano set), the club decided that they would technically fulfill the club's promise by giving paying club members the One Nite Alone... Live! 3-CD set, which was simultaneously released to retail. The original title track for the instrumental album ("Xenophobia") was never released in a studio version, but a live rendition is one of the highlights of One Nite Alone... Live!. The downloadable album was renamed Xpectation after one of the other tracks. All nine of the tracks start with "X", using Prince's trademark of abbreviating song titles and lyrics with letters, numbers or symbols.
The album is one of Prince's most sophisticated jazz compositions, far outstripping the musical depth of the various incarnations of the Madhouse project. This is largely because the album was mostly composed in conjunction with one of his best band configurations - the core of the "One Night Alone" group, including Candy Dulfer (sax), John Blackwell (drums) and Rhonda Smith (bass). The band is also joined by classical violinist Vanessa-Mae.

Album Review
For the first time as a fan I felt Prince embark on a musical trajectory I had no wish to accompany him on. Having felt him moving too far down the independent, self-indulgent, path of artistry, Prince was not only isolating himself but his fans, with completely inaccessible and even undesirable music. Even Prince could not be convinced to put this music on CD. The 9-MP3s that make up Xpectation forms of (and making up) nine words that begin with ‘X’. Indeed it was never worthy for CD, only put out in digital format from his NPG Music Club website. Prince proves his musical fallibility after all and Xpectation is unfortunately exhibit A. Its one saving grace Xenophobia was removed from the album as it had been released as a live version on One Nite Alone… Live!. The release turned to the ridiculous after the sublime The Rainbow Children. As it later turned out Prince got the taste for experimental music out of his system within a couple of years but all what it achieved was a collection more worthy as after dinner ambiance than a showcase of Prince’s vast talent. Is this the same guy who wrote Darling Nikki? Needless to say it would be wrong to suggest this music is uninspired yet it provides too few footholds to inspire the listener. This is an album to buy to own, not to buy to love. His releases in 2003 are strangers in Prince’s musical canon, marking his ‘skip-able’ year. Every artist has one.