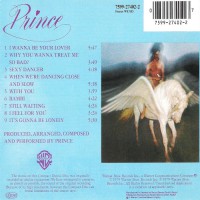 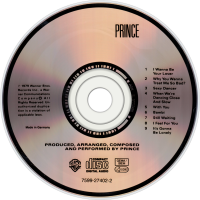 Prince is the second studio album by Prince, released on October 19, 1979. It was a quickly written album in reaction to his debut For You. It took seven weeks to complete. The album needed to have hits and sell well to make up for the blown budget on his first release. Worries were stifled with the success of the lead single "I Wanna Be Your Lover", which reached #1 on the R&B chart and nearly broke the top 10 on the pop chart.

Prince was recorded at Alpha Studios in Burbank, California within a mere six weeks, between April and June 1979. The album explores many themes (funk, soul, to even heavy metal) song I Feel For You was later re-recorded by and became a number one hit for Chaka Khan. Her version of the song would win Prince a Grammy in 1984 for Best R&B Song. Notably, during the recording of this album the song Purple Rain was also conceived. Prince sold 500,000 copies in the US on its release in April 1980 and the song I Wanna Be Your Lover became a breakthrough hit and responsible for pushing sales of the album to 1,000,000, the benchmark for Platinum accreditation, and reach number 22 on the Billboard charts and remained in the black Top 100 for 23 weeks.