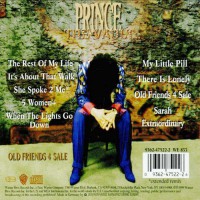 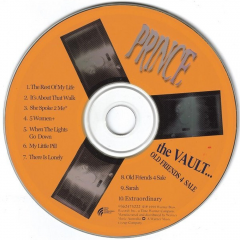 The Vault: Old Friends 4 Sale is a compilation album by Prince, containing material recorded from 1985 through 1994. It was released by Warner Bros. Records without his co-operation and at the same time as his Arista album release the same year, Rave Un2 the Joy Fantastic. Fans often complain that the songs have been overworked and watered down from the original versions that can be heard on various bootlegs, particularly "Old Friends 4 Sale". Not much promotion was done in the US or UK to support the album; however, "Extraordinary" was occasionally performed during his One Nite Alone... Tour.

Album Review
The release of The Vault… Old Friends 4 Sale proved Prince’s point: that record labels can and will release music against the wishes of the artists whom created it. One minute Warner Brothers were wanting to limit the volume of output Prince put into the market, and since parting with the label, the next minute they put out a greatest hits package The Very Best Of Prince in 2001 and in 1999, this. That said, it is a shame it needed a dispute over a contract to get these songs released. Unfortunately for Prince it was Warner’s vault not Prince’s – yet another vindication of Prince’s point as he should have owned his music in the first place. Nevertheless The Vault… Old Friends 4 Sale provides some gems; 5 Women, There Is Lonely and Old Friends 4 Sale – perhaps Prince’s most revealing song to date. There is some fun to be found too, taking form with great swing in The Rest Of My Life and Its About That Walk, although the top track on the album is the bongo-tastic When The Lights Go Down a remarkable tune and which demands to be listened to over and again.