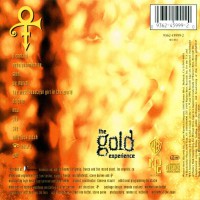 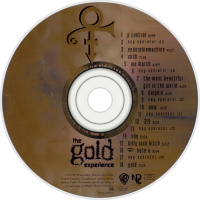 The Gold Experience is the seventeenth studio album by Prince (his stage name at that time being the love symbol he created). It was released on September 26, 1995. Keith Harris of Blender cites it as "his strongest record of the '90s, a mix of newly stripped-down funk and delicate balladry that reasserts 's dynamic range."
Prince wanted to release The Gold Experience under the symbolic moniker in 1994, alongside Come, which was marketed as a "Prince" album of "old" material. Both albums contained material from Prince's musical production called Glam Slam Ulysses. The plan was to show the superior quality of the newer material as opposed to the older "Prince" material. Plans were thwarted by Warner Bros., which felt the market would be over-saturated with Prince material, and withheld the album. Prince was prompted to protest by appearing in public with the word "slave" written on his face and stating The Gold Experience's release date would be "never".
Songs originally intended for the album, such "Acknowledge Me", "Ripopgodazippa", "Interactive" and "Days of Wild", were removed by the time of the album's release. It is believed that "Days of Wild" was nixed because Prince was never satisfied with the studio version. By the time the album actually was released in 1995, Prince's interest in it had passed, and he was working on songs for his 3-CD opus, Emancipation, which was partially responsible for the album's lack of commercial success. Despite that, The Gold Experience garnered Prince his best reviews in nearly a decade. The album has been long out of print but still remains a fan favorite.
The Gold Experience produced three singles, each with an accompanying music video: "I Hate U", "The Most Beautiful Girl in the World", and "Gold". Additionally, a video for "Dolphin" was released prior to the release of the album. "P Control" was also intended to be released as a single, but was canceled because it did not receive enough airplay. It was, however, performed at the 1995 VH1 Fashion Rocks Awards.
The song "Billy Jack Bitch" was speculated by many sources to have been written about a Minneapolis Star Tribune gossip columnist known as "CJ". Prince denied the song was about the columnist when CJ herself interviewed him. Lenny Kravitz appears in the chorus but he was not credited on the album liner notes, probably because of problems with his record label not giving authorisation.
The song "319" appears on the soundtrack of the 1995 film, Showgirls.

Album Review
Intended to release the album on 7 June 1994 The Gold Experience was postponed by Warner Brothers to not compete with that August’s release of Come, their withholding The Gold Experience heightened Prince’s embittered dispute over his contract with the label and their ownership of his music, plus the fact that he considered The Gold Experience also to be his best work, the fall out from this would consume Prince for years to follow. Aptly, it is certified Gold by the RIAA.

The CD single The Most Beautiful Girl In The World would precede the album by some 19 months. It would become Prince’s first and only UK number one. Prince also continued with the supporting tour The Ultimate Live Experience, regardless, during which large screens showcased the album’s artwork emblazoned with: “release date … NEVER!”. It became the first ever tour to promote an album not even released, and with the very real prospect of The Gold Experience never being released (albeit it was eventually released in September 1995 and long after the tour had finished). The lead single The Most Beautiful Girl In The World became Prince’s first release under the name of The Artist Formally Known As Prince (The Artist Formally Known As Prince), its release only permitted by Warner under the proviso Prince pay for the distribution himself. So he did – putting it out under NPG Records, his new label which replaced the recently closed Paisley Park Records. The voice of the NPG Operator is Rain Ivana.