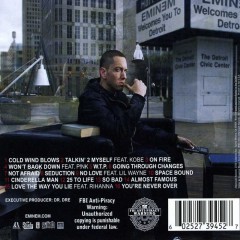 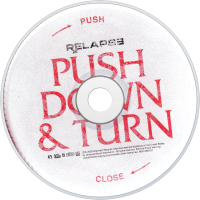 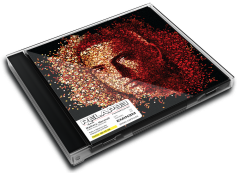 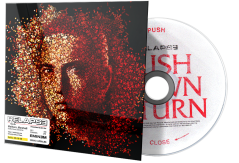 Relapse is the sixth studio album by American rapper Eminem, released on May 15, 2009 by Interscope Records. It was his first album of original material since Encore (2004), following a four-year hiatus from recording due to his writer's block and an addiction to prescription sleeping medication. Recording sessions for the album took place during 2007 to 2009 at several recording studios, and Dr. Dre, Mark Batson, and Eminem handled production. Conceptually, Relapse concerns the ending of his drug rehabilitation, rapping after a non-fictional relapse, and the return of his Slim Shady alter-ego.
One of the most anticipated album releases of 2009, Relapse debuted at number one on the US Billboard 200 chart, selling 608,000 copies in its first week. It produced three singles that attained chart success and has been certified double platinum by the Recording Industry Association of America. The album received generally mixed reviews from most music critics, who were mostly divided in their responses towards Eminem's lyrics. It earned him two Grammy Awards and has sold 2.2 million copies in the United States and 5 million copies worldwide.

User Album Review
Since 2004's Encore it's been a difficult five years for Eminem. The rapper's painkiller addiction and reclusive behaviour which followed best friend Proof's murder threatened to end Marshall Mathers' career for good. Given this bleak period and Em's penchant for violent imagery and misanthropic themes, fans may imagine Relapse to be a tough listening experience.
On first song 3AM Dr Dre's slasher-movie score synths mirror Em's tale of murder and amnesia. Lyrically, it's brutally evocative with a Silence Of the Lambs reference and lines like, ''Wake up naked at McDonald's covered in blood again'' and, ''Put the key in my door/bodies laying all over the floor''.
On My Mom the MC who first complained about said parent on 1999 hit My Name Is correctly states ''I know you're tired about hearing about my Mom''. But he continues, ''What kind of Mom wants her son to grow up as an underf******achiever?'' If that profanity seems shoehorned in there's no shortage of it throughout Relapse. It's an angry work.
Insane suggests Mom may have turned a blind eye to abuse from a step-father with the pitch-black couplet: ''One night he walked in and said ''I want my **** sucked in the shed/ can't I play Teddy Ruxpin instead?''.
Medicine Ball sees Slim Shady mimic paralysed Superman actor Christopher Reeves to say ''Let's breakdance'' amid the sleekest production on the record.
Incongruous single We Made You is the album's only real commercial moment and a hilarious dissection of fame, all Bugsy Malone piano loops, references to Amy Winehouse's marital troubles and sung chorus.
Two rare frivolous tracks, Old Times' Sake and Must Be The Ganja, are serviceable smoking anthems, with the former seeing Dr Dre rap ''If at first you don't succeed, won't hurt to smoke some weed''.
This sixth album from Detroit's superstar is typically uncompromising and full of characteristically spiky humour. Relapse is as honest, funny, assured and well-produced as anyone would expect from Eminem and Dr Dre. The only real fault is evident when comparisons are made. It's a great album but on a musical and emotional level Kanye West's 808s & Heartbreak is undeniably fresher.