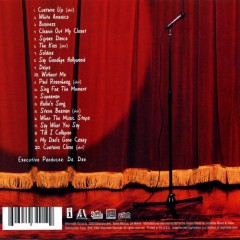 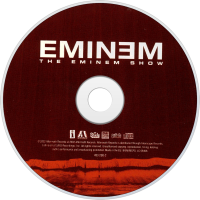 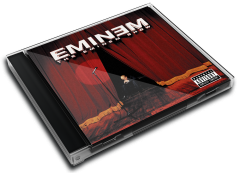 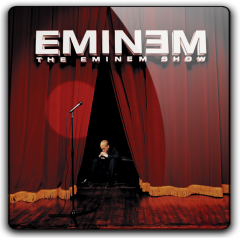 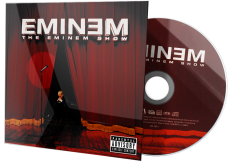 The Eminem Show is the fourth studio album by American rapper Eminem, released in 2002. It was the best-selling album of 2002 in the United States, with sales of 7.6 million copies. At the Grammy Awards of 2003 it was nominated for Album of the Year and became Eminem's third LP in four years to win the award for Best Rap Album.
The album debuted at number one on the US Billboard 200 chart, selling approximately 284,000 units in its first week, which due to a premature release by retailers and street-date violations, counted only a day and a half of sales. The album sold 1,322,000 copies the following week, where it registered a full week of sales. The album topped the Billboard 200 for five consecutive weeks. The album also spent five consecutive weeks at the top of the UK Albums Chart. It has gone on to sell over ten million copies. On March 7, 2011, the album was certified ten-times-platinum by the Recording Industry Association of America, making it Eminem's second album to receive a Diamond certification in the United States.
In 2009, the album was ranked #317 on Rolling Stone's list of the 500 greatest albums of all time, and was later ranked at #84 on the same magazine's best albums of the 2000s decade. The album received critical praise by most music critics and is often debated as Eminem's most personal and best work. Eminem himself acknowledged during an interview with MTV that was recorded on May 25, 2002, that he felt that The Eminem Show was his "best record so far". The Eminem Show was Eminem's first album to be mainly self-produced.

User Album Review
The sleeve of ‘The Eminem Show’ sees our anti-hero pensive, in a dinner jacket, just out of the spotlight as the red velvet curtains open. “What the fuck,” you can almost hear him thinking, “am I going to do for an encore?”

Eminem‘s last album, 2000’s ‘The Marshall Mathers LP’, made him nothing less than the biggest and best pop star in the world. A true artist, no one since Kurt has raged so hard and articulately, no-one since – [a]David Bowie[/a]

has played with their persona with more intelligence, and no-one since the Sex Pistols

has pissed more people off. To do all this, and to do it while selling millions of records to the disenfranchised, supposedly dumbed down “little hellions” he always wanted to reach, is about as much as any musician could hope for.

Eminem‘s career is now all about extending that high. Part of the power of ‘The Marshall Mathers LP’ was that it seemed to come from nowhere – certainly it was a quantum leap from his 1999 debut. Fame and familiarity means that Eminem can never pull that trick off again, but he can improve his music, find new things to talk about, refine his amazing flow. ‘The Eminem Show’ sees Marshall Mathers doing all these things, backing away from the scorched-earth nihilism of his last album towards a more personal, vulnerable, even – gulp – mature artistic vision.

Not that this means he’s gone soft, mind. On ‘My Dad’s Gone Crazy’, Eminem responds to his mom’s advice ‘if you can’t say anything nice, don’t say anything’ like this: “…lick/A million motherfucking cocks per second/I’d rather make a motherfucking gospel record”. And ‘The Eminem Show’ sees the rapper saying a great deal of not-very-nice things: about groupies (“put anthrax on a Tampax and slap you ’til you can’t stand”), his mother (“I hope you fucking burn in hell”), his ex-wife (“addicted to smack”), his father (“just fucking wish he would die”), as well as lesser targets George Bush, R Kelly, Canibus, Jermaine Dupri, Limp Bizkit and Moby. Even his expressions of affection are obnoxious. Though it’s partially masked (the only censored line on the album), on ‘Hailie’s Song’, an otherwise tender eulogy to his daughter, Eminem clearly raps the line “I’m so glad her mom didn’t abort her”. Gay campaigners, however, can claim a victory. While ‘The Marshall Mathers LP’ was full of vituperative remarks about homosexuals, ‘The Eminem Show’ contains just a couple of “faggots” and on its last track, the claim “I’m out the closet, I’ve been lying my ass off/All this time, me and Dre been fucking with hats [condoms] off”.

However, the majority of ‘The Eminem Show’ is preoccupied with Mathers’ fame and family situation. We get plenty on the lawsuits and, on ‘Cleaning Out My Closet’, a stunning outpouring of grief-stricken anger against his mother. Though often hidden by strident beats and Eminem‘s ferocious articulacy, the album’s recurrent emotion is the loneliness created by fame, money, and failed relationships. As the panic-stricken rap on ‘Say Goodbye Hollywood’ has it, “It’s like the boy in the bubble who never could adapt /I’ve sold my soul to the devil, I ain’t never get it back…/All I wanted was to give Hailie the life I never had/Instead, I forced us to live alienated”.

Musically, though, things have never looked brighter. ‘The Eminem Show’ is bigger, bolder and far more consistent than its predecessors, tackling disco (‘Without Me’), bombastic funk (‘Til I Collapse’), Dirty South-style hip-hop (the amazing ‘Squaredance’) and rock (‘White America’) with aplomb. In short, it’s a third album that avoids all the pitfalls of third albums: introspective without being self-pitying, expansive in scope without being pompous, exploring new directions without disappearing up its own arse. Its genius is mighty, its flaws are small. It’s the greatest ‘Show’ on earth.