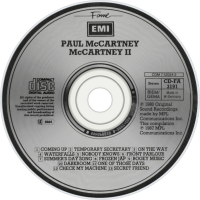 McCartney II is the third solo studio album by Paul McCartney, and the first since the formation of Wings in 1971. It was released in 1980, a year before the band's dissolution and while their future lay in limbo. The album is a significant departure for McCartney, as much of the album relies heavily on synthesisers and studio experimentation. The album was reissued on 13 June 2011 as part of the Paul McCartney Archive Collection.