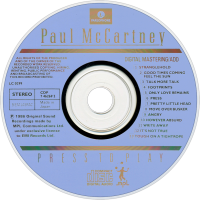 After the box office flop of the film Give My Regards to Broad Street, McCartney decided that it was time for a change of pace in his career. In an attempt to give his music a more contemporary sound, he joined forces with Hugh Padgham, an in-demand producer famed for having recorded Peter Gabriel, Genesis, Phil Collins, The Police, and XTC. Beginning in March 1985, McCartney began recording Press To Play, having written several new songs, many with current collaborator, former 10cc member Eric Stewart. Guesting on the album would be Pete Townshend, Phil Collins, Eddie Rayner (Split Enz's keyboard maestro) and Stewart himself.
The album would not be finished until the end of the year, by which time only one song would see release from its sessions - the title track to the film Spies Like Us, joined by Phil Ramone in the producer's chair. "Spies Like Us", a non-album single backed by Wings' 1975 recording "My Carnival", proved to be a US top 10 hit (and McCartney's last), setting the stage for Press to Play.