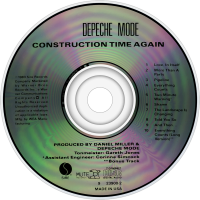 Construction Time Again is the third studio album by the British electronic band Depeche Mode, released in 1983. This was the first Depeche Mode album with Alan Wilder, who composed the songs "Two Minute Warning" and "The Landscape Is Changing" (as well as the B-side "Fools"). The title comes from the second line of the first stanza of "Pipeline".
The album was recorded at John Foxx's Garden studios in London, engineered by Gareth Jones (who had also engineered Foxx's seminal electronic album, Metamatic). It was mixed in the Hansa Tonstudio in Berlin.
The album's cover artwork features the Matterhorn mountain.