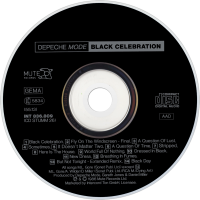 Black Celebration is the fifth studio album by Depeche Mode. Released by Mute Records on 17 March 1986, it further cemented the darkening sound that was initially hinted towards on their album Construction Time Again and Some Great Reward.
Black Celebration was cited as one of the most influential albums of the '80s.
Black Celebration Tour was the supporting tour for this album.