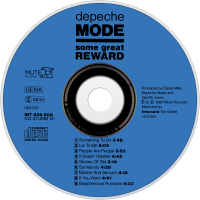 Some Great Reward is the fourth album by the British electronic group Depeche Mode, released in 1984. The album peaked at #5 in the UK and at #51 in the US. The title comes from the last lines of the bridge in "Lie to Me" when it repeats near the end. The album was supported by the Some Great Reward Tour.