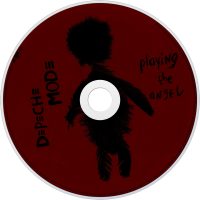 Album Review
A return to form. There, I said it. It's a boring old clichÃ© but in this case, an appropriate one. The troubled electro kings have come storming back with album number 11: a deeply personal work which shows off Dave Gahan's dramatic vocals to perfection, and shines with trademark Mode melancholia and dark sexuality.
The mood swings from hurt in tracks like "A Pain That I'm Used To" and "I Want It All" to hope, which tentatively radiates from "Nothing's Impossible". The first single, "Precious", manages to retain a pop catchiness while still remaining very much a lament. The whole album is an ode to isolation and confusion.
Glowing with crystalline synths, softly menacing guitars and fragile contemplation, Playing The Angel conjures up an almost tangible sense of damage. If you want to get a little closer to Gahan's notorious journey to heroin-induced hell and back, you've come to the right place.