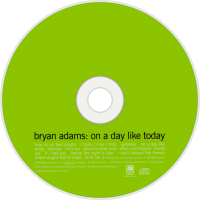 On a Day Like Today is an album by Canadian singer-songwriter Bryan Adams, released in 1998. Bryan recruited producer Bob Rock for this album. Bryan wanted to produce a hit album after critics panned his last studio album. On a Day Like Today was a success around the world, however at the time in the U.S. market, it became the first of Adams' albums since 1983's Cuts Like A Knife not to obtain a platinum sales certification. According to AllMusic, the record company didn't do a lot of advertising for album, as Adams and this album got caught when his record company sold his recording contract to rap label Interscope, who in turn did very little in the USA to promote it.