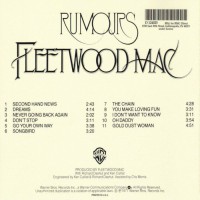 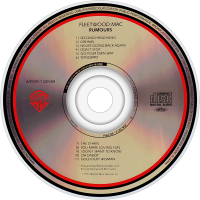 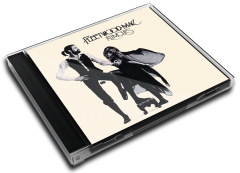 Rumours is the eleventh studio album by British-American rock band Fleetwood Mac. Largely recorded in California during 1976, it was produced by the band with Ken Caillat and Richard Dashut and was released on 4 February 1977 by Warner Bros. Records. The record peaked at the top of both the main United States Billboard chart and the United Kingdom Albums Chart. "Go Your Own Way", "Don't Stop", "Dreams", and "You Make Loving Fun" were released as singles. A Grammy Award winner, Rumours is Fleetwood Mac's most successful release with sales of over 40 million copies worldwide.
The band wanted to expand on the commercial success of the 1975 record Fleetwood Mac, but struggled with relationship breakups before recording started. The Rumours studio sessions were marked by hedonistic behaviour and interpersonal strife between Fleetwood Mac members; these experiences informed the album's lyrics. Influenced by pop music, the record's tracks were recorded using a combination of acoustic and electric instruments. The mixing process delayed the completion of Rumours, but was finished by the end of 1976. Following the album's release in 1977, Fleetwood Mac undertook worldwide promotional tours.
Rumours garnered widespread critical acclaim. Praise centred on its production quality and harmonies, which frequently relied on the interplay among three vocalists. The record has inspired the work of musical acts in different genres. Often considered Fleetwood Mac's best release, it has featured in several publications' lists of the best albums of the 1970s and the best albums of all time. In 2004, Rumours was remastered and reissued with the addition of an extra track and a bonus CD of outtakes from the recording sessions.

Album Review
Rumours by Fleetwood Mac has taken on a life of its own. Selling over 30 million copies world-wide, it has assiduously worked its way into so many households since its release in February 1977, that it's become part of the sonic furniture. It is as much a part of that year's landscape as Never Mind The Bollocks, "I Feel Love" or Saturday Night Fever and arguably the one least tainted by the passage of time.
It had been a tumultuous 1970s for Fleetwood Mac when they came to record this album on America's West Coast. After being left rudderless in the wake of founder Peter Green's departure, the core of drummer Mick Fleetwood, bassist John McVie and his keyboard-playing wife, Christine had finally found some form of stability and commercial success by adding the young singer-songwriting team of Lindsay Buckingham and Stevie Nicks. And then, after tasting triumph, it all fell apart, amidst affairs and acrimony. With every member of the band touched by some degree of relationship hell, they made a trouble-filled, cocaine-fuelled album . . . that sounded like a thousand angels kissing you sweetly on the forehead.
Buckingham emerges as top dog here; his swooping, ramshackle "Second Hand News" (with its euphoric chorus finally arriving two minutes into the song), "Never Going Back Again" and "Go Your Own Way" dominate the album. But it is far from a one-man show ”“ Nicks' "Dreams" is a beautifully insistent, sweetly nagging understated plea to lost love, while Christine McVie's "Don't Stop", "Songbird" and "You Make Loving Fun" typify proper, grown-up music.
Sonically, it's near perfect ”“ there is little fuss, no mess and hardly any waste. If the age was about redundant excess, you are hard pushed to hear any of it on tunes like "Don't Stop" or especially "Dreams", which both benefit from incredibly sparing instrumentation ”“ there is so much left out, it makes the tunes somehow seem busier by memory.
It became one of biggest records of all time, providing an antidote to the era while remaining entirely in step with its times. It led the group to make its thoroughly crazy yet quite beautiful follow-up, Tusk in 1979, bereft of the editing and economy that makes Rumours so very special.