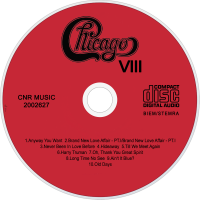 Chicago VIII is the seventh album by American rock band Chicago and was released in 1975. Following the experimental jazz/pop stylings of Chicago VII, the band returned to a more streamlined sound on this follow-up.

After five consecutive years of constant activity, the members of Chicago were feeling drained as they came to record Chicago VIII at producer James William Guercio's Caribou Ranch in Colorado in the summer of 1974. While the variety in styles explored on Chicago VIII were reminiscent of Chicago VI, this particular album had a more distinct rock feel, as exemplified on Peter Cetera's "Anyway You Want" and "Hideaway", as well as Terry Kath's Hendrix tribute "Oh, Thank You Great Spirit" and James Pankow's hit "Old Days" (#5). The ballad "Brand New Love Affair, Part I & II" charted at #61.

Preceded by Lamm's nostalgic "Harry Truman" (#13) as lead single, Chicago VIII was held over for release until March 1975 as Chicago VII was still riding high in the charts. While it easily reached #1 in the US, the album had a lukewarm critical reception - still commonly considered, by some[by whom?], as one of their weakest albums, resulting in the briefest chart stay of any Chicago album thus far. It was also the first album to feature session percussionist Laudir de Oliveira as a full-fledged band member, the first addition to the original lineup.

Inside the original LP package was an iron-on t-shirt decal of the album cover and a poster of the band in a station wagon being pulled over by a policeman.

In 2002, Chicago VIII was remastered and reissued by Rhino Records with two unreleased songs: "Sixth Sense" (an instrumental, or possibly a backing track) by Kath and "Bright Eyes" by Lamm, as well as version of "Satin Doll" recorded for Dick Clark's "Rockin' New Year's Eve" special - all as bonus tracks.