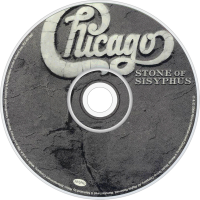 Stone of Sisyphus was supposed to be the eighteenth album (but actually the twenty-first) by American rock band Chicago, but after its recording in 1993, it was rejected by the record company. The album remained unreleased until June 17, 2008, after a nearly 15-year delay.

The album was set to be released as Chicago XXII in the United States on March 22, 1994. However, Warner Bros. Records, Chicago's record company at the time, was displeased with the album, and dismissed Stone of Sisyphus as being "unreleasable." This led to an acrimonious split with the band. The band's failure to issue an official press release regarding the album's mothballing and subsequent departure of guitarist Dawayne Bailey left fans to years of rampant debate and conjecture about the events surrounding Stone of Sisyphus.

Through its official website, as well as public discussion forums of past and present band members, the band actively worked to quell discussion and debate about Stone of Sisyphus, while sporadically releasing thematic albums. Recent information came to light regarding the actual reason for the album's shelving. The band's management was negotiating with the label regarding a licensing of the extensive Chicago back catalog and when those talks stalled, the label apparently retaliated by scrapping the project.

Like The Beach Boys' Smile and Guns n' Roses' Chinese Democracy, Stone of Sisyphus built a legend of its own. Tracks from the unreleased album surfaced on bootleg recordings, including on the internet, while many of the songs appeared on legitimate compilation releases.

On July 9, 1993, the band included "The Pull" in a concert at the Greek Theatre in Los Angeles to give the audience a taste of the upcoming album. The title song and "Bigger Than Elvis" were first released in Canada on the 1995 double CD compilation Overtime (Astral Music). A single edit-version of "Let's Take A Lifetime" debuted in Europe on the 1996 Arcade Records compilation called The Very Best Of Chicago (a title which would be reused in North America in 2002).

In 2003, the group finally allowed three tracks from Stone of Sisyphus -- "All the Years", the title song and "Bigger Than Elvis" -- to be officially released in the United States on The Box by Rhino Records.

Keyboard player Robert Lamm previously recorded a solo version of "All the Years" in the early 1990s for his 1993 solo album Life Is Good in My Neighborhood (initially released in Japan by Reprise Records in 1993, it was released in 1995 in the USA by Chicago's then label Chicago Records), and a version of "Sleeping in the Middle of the Bed (Again)" for his 1999 album In My Head.

Keyboard player and guitarist Bill Champlin recorded "Proud of Our Blindness," which was a slightly different lyrical version of "Cry for the Lost," for his 1995 solo album Through It All, whose liner notes included his stinging criticism of the major record labels inspired by the row Chicago had with Warner Bros. over Stone of Sisyphus.

In May 2008, Rhino Records announced that Stone of Sisyphus would be released with four bonus songs. Officially, number "XXXII" in the band's album count (following Chicago XXX and The Best of Chicago: 40th Anniversary Edition). One of the original songs for the 1994 release of the album, entitled "Get on This" (written by Dawayne Bailey, Walter Parazaider's daughter Felicia, and James Pankow), did not make it on the 2008 release. An official reason for this omission from Chicago or Rhino Records was not given. Frequently bootlegged, the Chicago Sun-Times notes that "Get on This" is "commonly the most-praised track in online fan discussions."