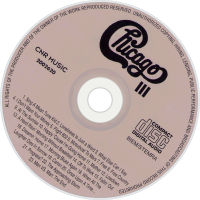 Chicago III is the third album by American rock band Chicago and was released in 1971. It was the band's third consecutive double album of new studio material in less than two years.

In the wake of Chicago's enormous worldwide success, Chicago spent almost all of 1970 on the road, an exhaustive undertaking. When the band came to record Chicago III at the end of the year - which producer James William Guercio had already determined would be another double, they were physically drained.

Their long hours on the road gave the principal songwriters, Robert Lamm, Terry Kath and James Pankow, much food for thought, resulting in more serious subject matter, which contrasted with the positivity of their first two sets. Lamm documented his homesickness in the "Travel Suite", while Pankow bemoaned the winning battle of industry over nature in the instrumental "Elegy" suite, (an issue Lamm also touches upon in "Mother"). While Kath's multi-part "An Hour In The Shower" provides a reprieve from the sobering explorations elsewhere, Chicago III was undeniably the result of a band who had seen the flip side of the world over the last several months.

Chicago III is also notable for its variety of musical genres, with the band relying slightly less on their trademark horns. Both "Sing A Mean Tune Kid" and "Free" feature the influence of funk, "What Else Can I Say" and "Flight 602" have a country feel, while abstract qualities are found in "Free Country" and "Progress?"

Released in January 1971, initially on Columbia Records, Chicago III - their first album to sport a Roman numeral in its title - sold well upon its release, yet its paucity of big hit singles and its more experimental nature meant that it didn't wear as well with the masses as The Chicago Transit Authority and Chicago did. "Free" was a Top 20 hit, and Peter Cetera's "Lowdown" reached the Top 40. And while Chicago III marked a dwindling in UK fortunes, reaching #9 in a brief chart run, it provided Chicago with their highest charting disc yet in the US, going to #2.

Included with the album was a poster of the band dressed in the uniforms of America's wars, standing in front of a field of crosses, representing those who had died in the still ongoing Vietnam War. It also gave the number of casualties from each war up until the time of the album's release.