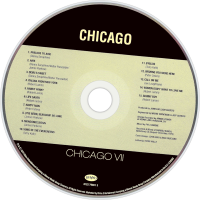 Chicago VII is the sixth studio album by American rock band Chicago and was released in 1974. It is notable for being their first double album of new material since 1971's Chicago III, and remains their final studio release in that format.

While touring in support of Chicago VI in 1973, the band began getting restless and started integrating some lengthy jazz instrumentals into their sets. While audiences were somewhat mixed in their reaction, Chicago greatly enjoyed the experience and decided, after years of talking about it, to record a pure jazz-influenced album, and headed straight to producer James William Guercio's Caribou Ranch studios to cut their ambitious new album.

While the sessions started off well, there was soon dissension within the group about the jazz project, with, reportedly, Peter Cetera and Guercio both leery at the commercial risk of such an undertaking. While the band reasoned that some of the jazzy material was too good to throw away, the others finally relented to including the more pop and rock-oriented songs that the band had composed in the meantime. Almost by accident, Chicago had another double album on their hands.

Of the more conventional material, Chicago once again turned in a varied set of songs, with Terry Kath's "Byblos", named after a club in Osaka, Japan that Chicago had played, ranking among his best efforts. Robert Lamm, who was presently recording a solo album entitled Skinny Boy, turned in several new songs, even donating his solo album's title track, featuring The Pointer Sisters on backing vocals. While James Pankow came through with another success, "(I've Been) Searchin' So Long" (#9), and trumpeter Lee Loughnane got lucky on his first try at songwriting in the hit "Call on Me" (#6), it was Peter Cetera who made the biggest strides on Chicago VII, composing "Happy Man" and "Wishing You Were Here" (#11), a lush ballad (signs of the future) that features three of The Beach Boys on backing vocals and which became a big hit in late 1974. "Happy Man" was subsequently covered by Tony Orlando and Dawn on their album To Be With You.

Chicago VII is also notable for featuring Lee Loughnane's lead vocal debut ("Song of the Evergreens"), and for having writing contributions from all (and only) the members of the band.

Released in March 1974, Chicago VII - despite its first disc being almost exclusively jazz instrumentals - shot to #1 anyway in the US becoming another big success for Chicago.

In 2002, Chicago VII was remastered and reissued on one CD by Rhino Records with one bonus track: an early rehearsal of Kath's "Byblos".