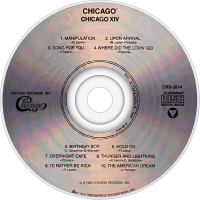 Chicago XIV is the twelfth album by the American band Chicago, released in 1980. Recorded at a time of waning interest in the band, Chicago XIV remains one of Chicago's poorest selling albums and was a commercial flop. It is also notable for being their last studio album with Columbia Records.

After the commercial and critical disappointment of Chicago 13, and the departure of guitarist Donnie Dacus, Chicago decided that a new strategy was in order. Instead of incorporating another guitarist into the band, they instead hired on Chris Pinnick as a session player and live performer. They also tried a new producer, this time Tom Dowd, who had worked with Aretha Franklin, Cream, Eric Clapton, and Toto. With Dowd taking the reins, and with Chicago abandoning the ill-advised dance club atmosphere that permeated the last album, the team recorded a lean, more streamlined record which would, predictably, be called Chicago XIV. It may have been a response to the under-produced, New Wave efforts on the radio at the time. The album was easily the band's least orchestrated effort to date. Still, it wasn't a perfect marriage, with Dowd having to shepherd a group whose members were not all on the same wavelength or headspace.


With Peter Cetera taking an even greater role in the band, his compositions included a mix of ballads, pop and rock songs, giving Chicago XIV a somewhat adult contemporary sound. Robert Lamm turned in the rockers "Manipulation" and "I'd Rather Be Rich" (a song from 1975) and James Pankow also delivered the uptempo - if downbeat - "The American Dream". Like Chicago 13 before it, Chicago XIV did not improve Chicago's fortunes. In fact, XIV did worse than 13, despite being an "improved" album. To the record-buying public, Chicago's image was out of touch in 1980 and once the new album was released, it became clear that any attempt to win back their fans would be in vain.

Poorly promoted by Columbia Records, a label that was increasingly disappointing Chicago, Chicago XIV went unnoticed upon release and bombed, only reaching #71 in the US, and disappeared quickly. There were no singles hits again, with "Thunder and Lightning" stalling below the top 50 and "Song For You" failing to chart. Chicago also saw a poor attendance in many venues during the supporting tour. Realizing that the relationship had soured considerably, Columbia Records terminated their relationship with Chicago. In 1982, Robert Lamm recalled,

""The thrill was gone as far as they were concerned, I think. Especially after Jeff Wald, who managed us in 1978 and 1979, kind of bullied them into signing a ridiculous multimillion dollar contract where every time we delivered an album, they had to cough up a million bucks. CBS didn't get close to recouping their money, and they wanted to get out of the deal. In fact they ended up paying us to leave the label."

As a settlement to ending the arrangement early, Columbia released the band's second Greatest Hits album and jettisoned them from the label. The money from the settlement was used to record Chicago 16 independently, while the band shopped for a new label. Percussionist Laudir de Oliveira, with Chicago since 1973, decided to explore other options and would leave the band in 1981, realizing that the Latin percussion evident in the latter half of the previous decade no longer fit the band's style.

In 2003, Chicago XIV was remastered and reissued by Rhino Records with three outtakes from the sessions, "Doin' Business" (which first appeared on the 1991 4-Disc anthology Group Portrait), "Live It Up" and "Soldier of Fortune" as bonus tracks.