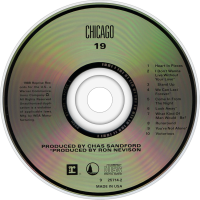 Chicago 19 is the sixteenth album by the American band Chicago, released in 1988. After recording Chicago 18 with David Foster, the band decided to expand their sound with other producers and worked primarily with Ron Nevison and Chas Sandford for this album. There was also a slight shifting in labels, with their Full Moon Records imprint now being carried by Reprise Records.

Similar to the reaction to its predecessor, Chicago 19 became a moderate success on the album chart (although it went platinum) yet had major hit singles, including the #1 hit "Look Away", as well as "I Don't Wanna Live Without Your Love" (#3), and "You're Not Alone" (#10). A slightly remixed version of Jason Scheff's "What Kind Of Man Would I Be?" (#5) would also prove to be a big success in late 1989, as part of the follow-up Greatest Hits 1982-1989 release. This album was the first Chicago effort to spotlight keyboardist/singer Bill Champlin on lead vocals, who sang all three of the album's hit singles. The fact that the group was highlighting a different voice on singles that had no signature horn sound may have hindered 19's sales. The album also relied heavily on outside writers, continuing a trend from the previous album. The first two singles were written by Diane Warren (who was virtually ruling the charts at that time) with the third penned by Jim Scott.

However, following its release, there would be another line-up casualty with the surprising 1990 firing of founding drummer Danny Seraphine, making Chicago 19 his last project with Chicago, just over twenty years after they originally formed. He was replaced on the next studio album by session drummer Tris Imboden, who remains to this day.