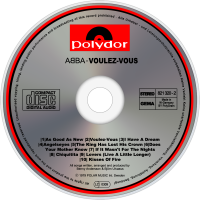 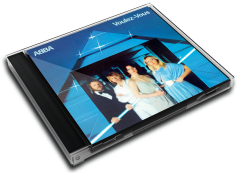 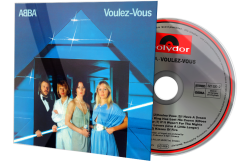 Voulez-Vous is the sixth studio album by Swedish pop group ABBA, released in 1979. It was the first ABBA album to be recorded at Polar Studios in Stockholm, and the only ABBA album to include a studio recording made outside Sweden. Some of the songs were secretly written and demoed at Compass Point Studios in Nassau, Bahamas, and the title track was recorded at Criteria Studios in Miami. Voulez-Vous was first released on CD in 1984. The album has been digitally remastered and reissued four times; first in 1997, then in 2001 and in 2005 as part of the The Complete Studio Recordings box set, and yet again in 2010 for the Voulez-Vous Deluxe Edition.

Album Review
For a group perceived as a lovable but lightweight pop outfit, it is surprising how much ABBA developed. In a career that took them from power pop to mini-rock operas to modish synth pop, the Swedish four-piece at no point rested on their laurels.
Voulez-Vous is a case in point. First released in the UK in April 1979, it was an effort that saw Agnetha, Benny, Björn and Anni-Frid put their dancing shoes on to join in with the dominant disco craze. Songs like As Good As New and the title-track see pulsating basslines married to sweeping strings and/or mellifluous keyboard parts. The quietly vengeful The King Has Lost His Crown slackens the pace a little but retains the slick funkiness. It’s a concoction that, though flawless, can be exhausting; but ABBA had an advantage over supposed genuine disco merchants in the shape of their pop-craft. With tracks like Chiquitita – a beautiful, vulnerable, Latin-inflected ballad – and the chanted utopianism of I Have a Dream they are able to provide a pocket of air on a disco floor that would otherwise get sweaty and stultifying. The only real clinkers are Lovers (Live a Little Longer), a would-be saucy anthem which is merely shrill, and Does Your Mother Know, a slab of generic rock that would be risible even without memories of Björn performing it onstage in a clinging silver jumpsuit.
The bonus tracks on this Deluxe Edition include pulsating contemporaneous single Gimme! Gimme! Gimme! (A Man After Midnight), Chiquitita B side Lovelight, album outtake Dream World and the extended 12” promo version of the title-track. The disc two DVD features a BBC in-concert documentary, TV performances, TV commercials and a gallery of picture sleeves. The objective of providing an idea of ABBA’s place in the culture of the time is valid but the inclusion of such material makes all the more irritating the exclusion from the audio disc of the familiar single version of Summer Night City in favour of the long version first released on the Thank You for the Music box-set. Also, why not the other Voulez-Vous outtakes included on that box-set? It all serves to undermine the comprehensiveness that is the whole point of the Deluxe series – something that, yes, not even the delights of ABBA’s turns on The Mike Yarwood Show and Swap Shop can make up for.