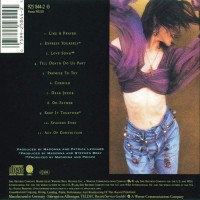 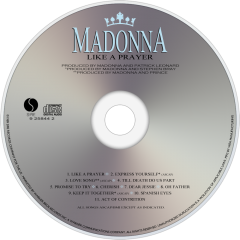 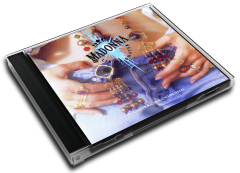 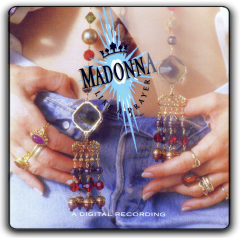 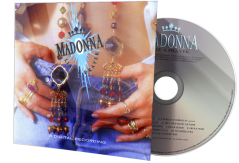 Like a Prayer is the fourth studio album by American singer-songwriter Madonna, released on March 21, 1989 by Sire Records, three years after her previous studio album. Madonna worked with Stephen Bray, Patrick Leonard, and fellow icon Prince on the album while co-writing and co-producing all the songs. As Madonna's most introspective release at the time, Like a Prayer has been described as a confessional record. She described the album as a collection of songs "about my mother, my father, and bonds with my family." The album was dedicated to her mother, who died when Madonna was young.

The album uses live instrumentation and incorporates elements of dance, funk, gospel, and soul into a more general pop style. Madonna drew from her Catholic upbringing, as seen in the album's title track and lead single "Like a Prayer". The lyrics deals with themes from Madonna's childhood and adolescence, such as the death of her mother in "Promise to Try", the importance of family in "Keep It Together", and her relationship with her father in "Oh Father". Madonna also preaches female empowerment in "Express Yourself". Upon its release, Like a Prayer was mostly praised by music critics. Rolling Stone hailed it as "...as close to art as pop music gets."

Commercially, Like a Prayer became an international success like its predecessors, reaching the top of the charts in multiple territories. The album was certified quadruple platinum in the United States by the Recording Industry Association of America. Six singles were released from the album: "Like a Prayer", "Express Yourself", "Cherish", "Oh Father", "Dear Jessie", and "Keep It Together". "Like a Prayer" became Madonna's seventh number-one on the Billboard Hot 100, while "Express Yourself" and "Cherish" peaked at number-two. Worldwide the album has sold over 15 million copies.

With the singles' accompanying music videos, Madonna furthered her creativity and became known as a leading figure in the format. The music video for "Like a Prayer" was a lightning rod for religious controversy, using Catholic iconography such as stigmata and burning crosses, and a dream about making love to a saint, leading the Vatican to condemn the video and causing Pepsi to cancel Madonna's sponsorship contract. "Express Yourself" was the most expensive music video ever made at the time. The album preceded Madonna's ground-breaking Blond Ambition World Tour. At the end of the 1980s, following the release of Like a Prayer, Madonna was named as the "Artist of the Decade" by media such as Billboard, MTV, and Musician magazine.

User Album Review
Madonna’s spectacular fourth album revealed just how grand, artistic, and personal a pop star could be at the very height of her fame.

Read the reviews of Madonna’s blockbuster 1989 album Like a Prayer and you’ll see a lot of confession-related imagery—not because of how her career had been steeped in Catholicism, but because of the narratives surrounding the superstar as she geared up to release her fourth album. She tried to act on screen in Who’s That Girl and on stage in David Mamet’s Speed-the-Plow; she turned 30; her tabloid-dominating marriage to bad-boy actor Sean Penn had ended. “Was this to be her atonement?” brayed the subtext.

These were ideal conditions for listeners to use an album by pop’s most notorious—and most famous—woman as diary pages, but to at least one interviewer, Madonna bristled at the concept. “People don’t see that you can take some of your experiences from real life and use part of them in your art,” Madonna told Vogue in May 1989. “They try to make everything an absolute truth.” Yet elsewhere, she also noted that Like a Prayer was in part about her taking greater control of her narrative. “My first couple of albums I would say came from the little girl in me, who is interested only in having people like me, in being entertaining and charming and frivolous and sweet,” Madonna told Interview in May 1989. “And this new one is the adult side of me, which is concerned with being brutally honest.”

While Madonna was no shrinking violet during the first chunk of the ’80s—the decade of Madonna wannabes, MTV Video Music Awards-ready wedding dresses, and “controversial” her officially recognized prefix—Like a Prayer does showcase her growth as a pop artist, from the gnarled guitar that opens its title track all the way through its warped-tape closer “Act of Contrition.” She takes more chances lyrically and musically, and while they don’t always work, they do give a glimpse at her restlessness and increased willingness to take musical chances, whether she’s bringing in Prince or letting her voice’s imperfections into songs or taking on heavy, personal-life-adjacent topics.

“Like a Prayer,” with its lyrics of redemption derived from spiritual surrender or some sort of sex act (or a combination of the two) and roof-raising gospel choir, shimmies and saunters, Madonna using its lite-funk building blocks to anchor a giddy sing-along. “Express Yourself” is led by one of Madonna’s most bravado vocals, ready-made for lustily singing along with in a mirror or on a tense solo elevator ride. Though it’s worth noting that the version on Like a Prayer sounds anemic compared to the utterly superior Shep Pettibone single remix, which foregrounds the cowbell and makes the bouncing-ball bassline a go-on-girl counterpoint to Madonna’s message.

“Till Death Do Us Part,” on first blush, comes off like a breakup-themed update of earlier Madonna synth-pop offerings, like True Blue’s “Jimmy Jimmy,” or Like A Virgin’s “Angel.” She sings of feeling bereft over chiming synths and popping guitars—“When you laugh it cuts me just like a knife/I’m not your friend, I’m just your little wife,” she sighs. But the glittery vibes and hopped-up tempo take on a sinister edge in later verses, sounding more glassy-eyed as Madonna’s world-weary alter ego narrates the dissolving love and as the disturbing imagery—fading bruises, growing hate, flying vases—piles up. The final verse, which describes the circular nature of abusive relationships and which punctuates the titular phrase with the sound of shattered-glass, only adds to the song’s despair. Its follow-up “Promise to Try”—a slowly building ballad directed toward a young girl who’s struggling with the death of her mother—is mournful, the loneliness it describes sitting uncomfortably close to the cycle depicted in “Till Death.”

The windswept textures of “Oh Father”—loping pianos, drooping strings—give Madonna’s voice room to move. It swoops and swerves in a childlike voice as she sings of an ambivalent father-daughter relationship. Madonna’s mezzo, which wobbled on low notes and sometimes felt stretched in its upper registers, was often tsk-tsked by her critics, but her vulnerable vocal on “Oh Father” also shows why her music was so beloved; even if she’s singing of characters, as she claimed to Vogue, her gasps and shivers gave voice to the complex dynamic so many children have with their parents—whether biological, by marriage, adoptive, or spiritual.

That was, in part, an outgrowth of Madonna performing in the studio with her backing musicians. “We had every intention of going back and fixing the vocals, but then we’d listen to them and say, ‘Why? They’re fine,’” she told Interview. “They were a lot more emotional and spontaneous when I did them with the musicians… There are weird sounds that your throat makes when you sing: p’s are popped, and s’s are hissed, things like that. Just strange sounds that come out of your throat, and I didn’t fix them. I didn’t see why I should. Because I think those sounds are emotions too.”

The emotions on Like a Prayer aren’t all fraught. “Cherish” is a feather-light declaration of devotion that calls back to Cali-pop outfit the Association while updating Madonna’s earlier exercise in retroism “True Blue”; “Dear Jessie” engages in the reaching toward sounding “Beatles-esque” that was in vogue at the time, pairing fussy strings and tick-tock percussion with images of pink elephants and flying leprechauns. “Love Song,” meanwhile, is a synth-funk chiffon co-written by none other than Prince, one of Madonna’s few pop equals at the time. The two of them feel locked in an erotically charged session of truth or dare, each challenging the other to stretch their voices higher while the drum machines churn. Prince also played, initially uncredited, on “Like a Prayer,” the sauntering pop-funk track “Keep It Together,” and the album-closing “Act of Contrition,” a two-minute maelstrom that combines Prince’s guitar heroics, backward-masked bits from the title track, heavy beats, and its title inspiration, the Catholic prayer of… confession.

So maybe Madonna’s protests that Like a Prayer wasn’t autobiographical were a bit of a ruse—or just another way to keep the minds of America’s pop-watchers thinking about her music as she gave them an album where she was less afraid to show her flaws, more willing to try on new personas that had bits of her selves attached. After all, as she told The New York Times in 1989, “What I do is total commercialism, but it’s also art.” Like a Prayer straddles those two ideals with gusto, with even its less satisfying moments adding to the heat given off by the MTV era’s brightest star.