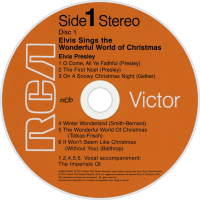 Elvis sings The Wonderful World Of Christmas is a 1971 album by Elvis Presley, and Elvis' second and final Christmas album. The album was released in October 1971, followed by the single from the album "Merry Christmas Baby" / "O Come All Ye Faithful" released in November 1971. This album was a top seller and topped the Billboard Holiday Albums Chart, and would have charted high on the Billboard 200 but from 1963 to 73 Holiday albums were not allowed to chart. It did not have the commercial appeal of Elvis’ first Christmas album. Over the years, it has become a perennial favorite. It was certified Gold on November 4, 1977, Platinum on December 1, 1977, 2x Platinum on May 20, 1988 and 3x Platinum on July 15, 1999 by the RIAA.

On later pressings, the song "Blue Christmas", which was recorded on June 27, 1968, was added to the track listing. The song had been previously released on the 1968 album, Elvis.