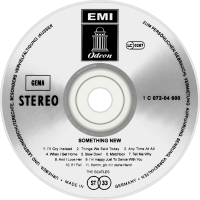 Something New is The Beatles' third Capitol LP release, but fifth American album following the United Artists release of A Hard Day's Night. This album includes eight songs from the original British release of A Hard Day's Night, as well as the remaining tracks "Slow Down" and "Matchbox" from the Long Tall Sally EP and the German language version of "I Want to Hold Your Hand". It was released in mono and stereo, and all mono mixes of the five songs duplicated from the United Artists soundtrack album are the same. This was the first Capitol Beatles album with all of the tracks in "true" stereo. The mono release contains alternative versions of "Any Time At All" (a different mix during the instrumental bridge), "I'll Cry Instead" (the "missing" third verse), "When I Get Home" (the line "Till I walk out that door again" during the song's bridge has a different vocal passage from the UK mono mix), and "And I Love Her" (McCartney's non-double-tracked vocal).

The album spent nine weeks at #2 on the Billboard 200, behind the United Artists A Hard Day's Night album.

This album was also released on the Parlophone label for sale only on American Armed Forces bases in Europe. These copies have great collector value. The album was also issued in Germany on the Odeon label. The German stereo version contains a reprocessed stereo version of "Komm, Gib Mir Deine Hand" and an extended version of "And I Love Her", repeating the closing riff six times instead of four. This mix was later released on the US version of Rarities.