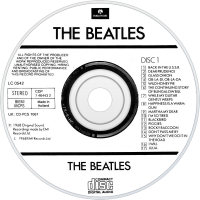 The Beatles is the ninth official album by the English rock group The Beatles, a double album released in 1968. It is also commonly known as "The White Album" as it has no graphics or text other than the band's name embossed (and, on the early LP and CD releases, a serial number) on its plain white sleeve.

The album was written and recorded during a period of turmoil for the group, after visiting the Maharishi Mahesh Yogi in India and having a particularly productive songwriting session in early 1968. Returning to the studio, the group recorded from May to October 1968, only to have conflict and dissent drive the group members apart. Ringo Starr quit the band for a brief time, leaving Paul McCartney to play drums on two tracks. Many of the songs were "solo" recordings, or at least by less than the full group, as each individual member began to explore his own talent.

Upon release in November 1968, the album received largely positive reviews and reached number 1 on the charts in the United Kingdom and the United States. The album is notable for the eclectic nature of its songs, which has divided critics in evaluating its legacy. The album has sold over 30 million copies worldwide, and was listed at number 10 on Rolling Stone's "500 Greatest Albums of All Time" list. Previously in 1987, as part of their 20th anniversary, Rolling Stone ranked it #9 on "The 100 Best Albums of the Last Twenty Years."