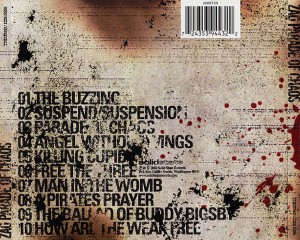 Parade of Chaos is the sixth full-length album released by metalcore band Zao. Released on July 10, 2002 by Solid State/Tooth & Nail/EMI. This album was recorded similarly to (Self-Titled) with Scott and Jesse writing in the studio and Dan being absent until time to record vocals. This album was also recorded at the same time as the recording of the All Else Failed reissue. This album featured the departure of bassist Rob Horner.