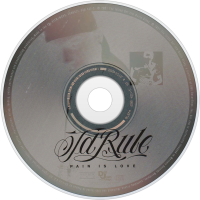 Pain Is Love is the third studio album by American Rapper Ja Rule released in 2001. Its sequel was released on February 28, 2012, entitled Pain Is Love 2.

Pain is Love was commercially successful in the hip hop music scene, it spawned two number one singles, debuted at #1 on the Billboard 200 with 361,000 copies sold in the first week and eventually was certified triple platinum in the United States. It had also received at Grammy nomination for Best Rap Album in 2002.