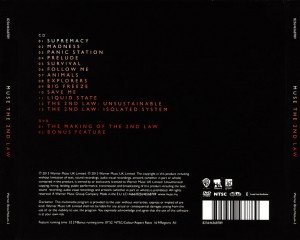 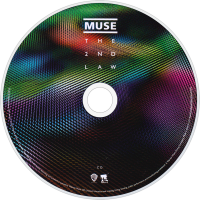 The 2nd Law is the sixth studio album by the English alternative rock band Muse, which was released throughout most of the world on 1 October 2012, and in North America on 2 October 2012.
Muse entered the studio to begin recording their sixth studio album in September 2011, which bassist Christopher Wolstenholme later confirmed in an interview with BBC Radio 1, stating: "September and October, that's when we're going to get into the studio to start writing the new album." In an interview with Billboard on 18 October 2011, the band's manager Anthony Addis revealed that Muse had begun recording their sixth album in London and that he expected it to be released by October 2012. Bellamy jokingly described the album as a "christian gangsta rap jazz odyssey, with some ambient rebellious dubstep and face-melting metal flamenco cowboy psychedelia" on his Twitter account.
In an interview with Kerrang! on 14 December 2011, Wolstenholme stated that the next Muse album would be "something radically different" from their prior releases. He also said that it felt as if the band were "drawing a line under a certain period" of their career with their sixth album. In another interview Chris mentioned that the band had experimented with music and sounds in particular, which makes this album their most experimental piece ever. It was revealed via Muse's publicist Tom Kirk on his Twitter account that composer David Campbell who had worked with acts such as Radiohead, Paul McCartney, Evanescence, Avril Lavigne, Beck and Adele was helping the band compose the album. In an interview in the April 2012 issue of NME, Bellamy said that the band were set to include elements of electronic music, with influences coming from acts such as French house duo Justice and UK electronic rock group Does It Offend You, Yeah?, as well as the inclusion of brass players.

Album Review
One of the most remarkable characteristics regarding Muse, themselves an entirely remarkable band, is the sheer speed at which many of their songs are recognised as being classic compositions of the grandest order. A track like 2006’s exquisitely bonkers Knights of Cydonia could only have been of their making. So it comes as no surprise that The 2nd Law takes no time at all to make its presence felt.
What is surprising, though, is that the band that so often would be Queen begins like Led Zeppelin. The swaggering Kashmir-style six-shooter riff of Supremacy is not only the sonic equivalent of a band bursting through the doors of a saloon bar and stopping the clientele dead; it also affirms that Matt Bellamy is a master of the guitar in the order of Metallica’s James Hetfield or AC/DC’s Malcolm Young.
The array of musical styles on show across The 2nd Law means that, like many of this band’s past albums, it doesn’t entirely coalesce into a seamless collection of songs. Panic Station borrows from both Queen’s Another One Bites the Dust and Michael Jackson’s Thriller, without ever attaining the majesty of either tune. But when this album works, it works well.
Survival, an official song of the 2012 Olympic Games, rides emphatic thumps, whereas Liquid State, one of two tracks penned by bassist Chris Wolstenholme, adopts a fluid groove. Closer The 2nd Law: Isolated System manages to unsettle the listener by use of a searching piano motif, reminiscent of Mike Oldfield’s Tubular Bells, famously heard in The Exorcist.
This may be Muse’s sixth studio album, but throughout the group present themselves in any guise they please. Where they go from here is anyone’s guess. But as it stands, this is a more than satisfying exploration into the unknown and more.