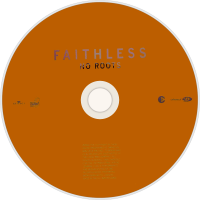 No Roots is the fourth album by British electronic music act Faithless, released in 2004. It reached number one on the UK Albums Chart that year, giving them their first number one album in their career. It features vocals from vocalist LSK, and the late Nina Simone.

Album Review
For a band renowned for creating classic clubbing anthems ("Insomnia", "God Is A DJ", "Salva Mea" and "Take The Long Way Home"), Faithless are a band who have suffered from the 'mixed bag' syndrome when it comes to writing albums.
Their long players,with the exception of Reverence,have never quite lived up to the genius of their house hits. However, the fourth album No Roots, manages to go that one step further and gather song writing, gravitas and production under the same roof.
Hit single "Mass Destruction" is a fine example of this as Maxi Jazz chooses to hit us with the highly-charged lyrics: "Whether long range weapon or suicide bomb a wicked mind is a weapon of mass destruction". This catchy, sign-o-the-times anthemembodies the mood of the whole album as the band combine ambient beats with a self-assessing philosophical perspective on the world today.
As ever,Rollo and co.have made a concerted effort to expand the dance boundaries. This time they have done it by attempting to ensure each track spills over into the next. "I Want More: Part 1 and 2" are juxtaposed superbly, with the former oozing affecting eloquence while the second half morphs into the album's tub thumping dance anthem.
The songs here are short and tightly focussed and thankfully, we are spared the drawn out monotonous melodies that often befall the progressive house genre. The fact that there are 15 songs on this record means the level of dynamism and interest is intact which, given that the entire album is in the key of C, is remarkable!
The title track is the pick of the bunch with Dido's angelic tones and Maxi'sspoken wordrolling into a perfect combination. The song reflects the sad beauty that made "One Step Too Far" such a strong track. It also makes you wonder why Dido doesn't stick to what she's good at, singing dance anthems instead of hollow love songs for housewives.
Whilst depressing at times it is a clear that the band, like so few others in dance music have a conscience and the intelligence to inject some meaning into their music. This, in the end, is the record's greatest strength. In an age where political descent in the world of commercial music is akin to career suicide Faithless should be applauded for their conviction.